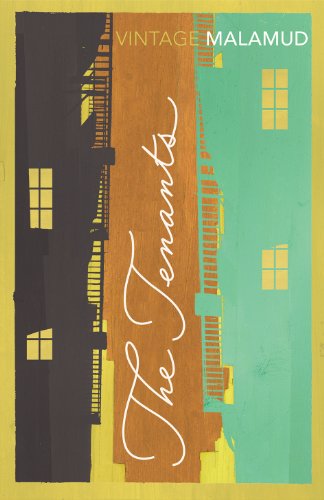 The Tenants
by Bernard Malamud

The Tenants by Bernard Malamud

The last remaining tenant in a condemned New York tenement, Harry Lesser struggles against rising panic and escalating odds to complete the novel he started ten years earlier. Then he stumbles on a black man, sitting typing in one of the deserted flats: Willie Spearmint, soul writer. Touchy, hostile and anti-semitic, demanding then denouncing Lesser's critical help with his floridly violent tales of oppression, Spearmint is exactly what Lesser doesn't need - or does he?

"Wise, funny and fluent" -- Paul Theroux
"In Malamud we may indeed salute a new American writer of power and originality. He has a wonderful sense of character and atmosphere" * Daily Telegraph *
"One of the best writers in the English language-His work embeds itself in one's consciousness and refuses to be dislodged" * Sunday Times *

Bernard Malamud, one of America's most important novelists and short-story writers, was born in Brooklyn in 1914. He took his B.A. degree at the City College of New York and his M.A. at Colombia University. From 1940 to 1949 he taught in various New York schools, and then joined the staff of Oregon State University, where he stayed until 1961. Thereafter, he taught at Bennington State College, Vermont. His remarkable, and uncharacteristic first novel, The Natural, appeared in 1952. Malamud received international acclaim with the publication of The Assistant (1957, winner of the Rosenthal Award and the Daroff Memorial Award). His other works include The Magic Barrel (1958, winner of the National Book Award), Idiots First (1963, short stories), The Fixer (1966, winner of a second National Book Award and a Pulitzer Prize), Pictures of Fidelman (1969), The Tenants (1971), Rembrandt's Hat (1973, short stories), Dubin's Lives (1979) and God's Grace (1982). Bernard Malamud was made a member of the National Institute of Arts and Letters, USA, in 1964, a member of the American Academy of Arts and Sciences in 1967, and won a major Italian award, the Premio Mondello, in 1985. Benard Malamud died in 1986.

GOR001735939
The Tenants by Bernard Malamud
Bernard Malamud
Used - Very Good
Paperback
Vintage Publishing
1999-08-05
160
0099289873
9780099289876
N/A
Book picture is for illustrative purposes only, actual binding, cover or edition may vary.
This is a used book - there is no escaping the fact it has been read by someone else and it will show signs of wear and previous use. Overall we expect it to be in very good condition, but if you are not entirely satisfied please get in touch with us.