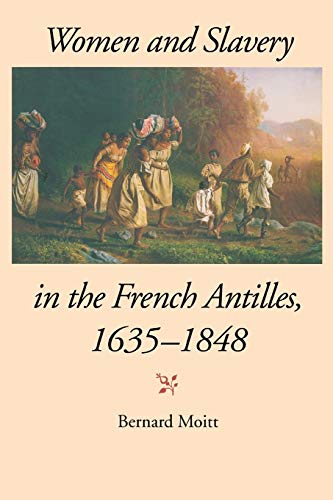 Women and Slavery in the French Antilles, 1635-1848
by Bernard Moitt

Out of Stock
$39.99
inc. GST
Gender had a profound effect on the slave plantation system in the French Antilles. This title details and analyses the social condition of enslaved black women in the plantation societies of Martinique, Guadeloupe, Saint-Dominique (now Haiti), and French Guiana from 1635 to the abolition of slavery in the French colonial empire in 1848.
Very Good
Only 0 left

Women and Slavery in the French Antilles, 1635-1848 by Bernard Moitt

Examines the reaction of black women to slavery.

As males outnumbered females for most of the slavery period and monopolized virtually all of the specialized tasks, the disregard for gender in task allocation meant that females did proportionately more hard labor than did males. In addition to hard work in the fields, women were engaged in gender-specific labor and performed a host of other tasks.

Women resisted slavery in the same ways that men did, as well as in ways that gender and allocation of tasks made possible. Moitt casts slave women in dynamic roles previously ignored by historians, thus bringing them out of the shadows of the plantation world into full view, where they belong.

Bernard Moitt is Assistant Professor in the History Department at Virginia Commonwealth University in Richmond. Previously, he taught at the University of Toronto and at Utica College of Syracuse University. Educated in Antigua (where he was born), Canada, and the United States, he has written on aspects of francophone African and Caribbean history, with particular emphasis on gender and slavery.

Slavery lasted a little over two centuries in Martinique, Guadeloupe, Saint-Domingue (now Haiti), and French Guiana, the former French Caribbean colonies. This study of enslaved women and gender treats all four territories from 1635 to 1848. Moitt (history, Virginia Commonwealth Univ.) synthesized materials from many fragmentary primary and secondary sources. His topical range includes domestic, field, and other forms of labor; reproduction; family life; slave women and the law; discipline and sexual exploitation; manumission; and forms of resistance. Although he treats the four territories as a unit, they were and are different in important respects. Furthermore, labor, economic, and productive systems did not remain unchanged over two centuries. French Guiana, for example, was a distinctly different place from Saint-Domingue, and in all Caribbean territories the 17th century, which saw the beginning of plantation systems, was different from the early 19th century, when they were in decline. Moitt conflates time and place in order to generalize. The scattered and difficult nature of his sources makes that procedure understandable, especially since studies of gender in slavery in the individual territories are almost nonexistent. Perhaps this study heralds more periodized and focused research. For Caribbean and slavery collections, upper-division undergraduate and above. -R. Berlean

Bernard Moitt is an assistant professor in the History Department at Virginia Commonwealth University in Richmond, Virginia. Previously, he taught at the University of Toronto and at Utica College of Syracuse University. Educated in Antigua (where he was born) and in Canada and the United States, he has published numerous articles and book chapters on aspects of francophone African and Caribbean history, with particular emphasis on gender and slavery.

GOR010178163
Women and Slavery in the French Antilles, 1635-1848 by Bernard Moitt
Bernard Moitt
Used - Very Good
Paperback
Indiana University Press
2001-10-25
240
0253214521
9780253214522
N/A
Book picture is for illustrative purposes only, actual binding, cover or edition may vary.
This is a used book - there is no escaping the fact it has been read by someone else and it will show signs of wear and previous use. Overall we expect it to be in very good condition, but if you are not entirely satisfied please get in touch with us.