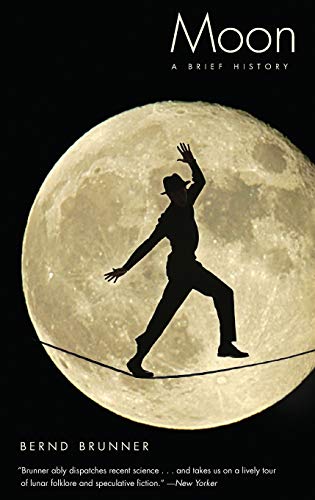 A cultural examination of Earth's moon, through history, science, and literature, from ancient times onwards.

An entertaining, often surprising cultural examination of Earth's moon, through history, science, and literature, from ancient times to the present Werewolves and Wernher von Braun, Stonehenge and the sex lives of sea corals, aborigi
"[An] elegant cultural history. . . .Brunner ably dispatches recent science . . . and takes us on a lively tour of lunar folklore and speculative fiction."-The New Yorker * The New Yorker *

". . . a nimble, fast-moving survey of the silvery moon's impact upon us and our world. Brunner looks at the moon's influence upon tides, of course, and also its place in early psychology, the occult, popular culture and as a necessary first step on humanity's journey to Mars."-Nick Owchar, Los Angeles Times

-- Nick Owchar * Los Angeles Times *
"Astronomers, geologists, rocketeers and space jockeys all have a practical interest in the Moon, but earthbound mortals look up and project all their fears and fantasies on to its pale surface. Without it our tides would not ebb and flow, our poetry would be the poorer, our nights would be dark and we would not believe in werewolves baying in the fullness of its face. We know perfectly well that the Moon is a cold, rocky, lifeless little satellite, but where's the romance in that? Brunner shows how it has shone silver through our dreams and destinies. It is the inspiration for myths and marvels and may be a kicking-off point for a further jump into space."-Kate Saunders, The Times (London) -- Kate Saunders * The Times (London) *
Read the New York Times article * http://www.nytimes.com/2010/12/28/science/28scibks.html?scp=1&sq=brunner&st=cse *
See the New York Times slideshow * http://www.nytimes.com/slideshow/2010/12/21/science/20101221-Moon.html *

"Brunner encapsulates this sense of mystery about the moon in a relative short and accessible work. A useful introduction to its cultural history."-Roger Launius, Senior Curator, Division of Space History, National Air and Space Museum Smithsonian Institution

"Moon is an enjoyable romp through the various fields of lunar lore, including its history as an object of curiosity, worship, and study. Fun and fast-paced!"-Dr. Paul D. Spudis, author of The Once and Future Moon

"An intriguing literary expedition to our nearest neighbor in space."-Patricia Fara, author of Science: A Four Thousand Year History

-- Patricia Fara
'Brunner's perky cultural history - of the Moon in superstition, song, and indeed science - encompasses many wonderful things both imaginary (inhabitants including man-bats or cat-women) and actual (strange lights known as "lunar transient phenomena", or the burial on the Moon of an American geologist's ashes).' - Steven Poole, The Guardian -- Steven Poole * The Guardian *
"Readable and appealingly illustrated."-The Bookseller * The Bookseller *
"There are plenty of arresting facts and ideas, and it is these that will give Moon its appeal to readers of popular science and history."-Lorien Kaye, The Age -- Lorien Kaye * The Age *
"This appealing little volume must surely be the most eccentric book of the year. But then isn't that appropriate, given that the subject is the Moon?"-Clive Aslet, Country Life -- Clive Aslet * Country Life *
"In his new book, Moon, Brunner weaves variegated information into an enchanting glimpse of Earth's closest celestial neighbor. . . . Brunner's ingenious and interdisciplinary explorations recast a familiar object in an entirely original and unforgettable light and will change the way we view the nighttime sky."-Lunar and Planetary Information Bulletin * Lunar and Planetary Information Bulletin *
"I deeply recommend this book to anyone who has ever looked for The Man in the Moon, and wondered, even for a moment, why it has taken us so long to consider going back for a return visit."-Brad Wright, Portland Book Review -- Brad Wright * Portland Book Review *

"In Bernd Brunner's . . . volume dealing with the moon, we are plunged immediately into a fascinating tour of the moon in ancient cultures. . . . well written, . . . full of fascinating bits of information."-James Trefil, Washington Post

-- James Trefil * Washington Post *
"Bernd Brunner serves up a learned but fluently written almanac of things lunar, with less emphasis on the science of the whirling orb than on the uses we have made of it in art, literature, folklore and the imagination over time."-Greg McNamee, Kirkus Reviews -- Greg McNamee * Kirkus Reviews *

"Many books cover moon science; many others concentrate on the mythology, folklore, and cultural aspects surrounding it. Brunner's does this and more, giving readers a thorough, entertaining look at people as much as at the moon. ... A valuable book for anyone with an interest in Earth's companion." -CHOICE

"The book is a tour de force on the relationship between man and the moon, giving equal attention to science, poetry, and mythology, while still including a welcome body of miscellanea. It quickly becomes clear that the scientific history of the moon is inseparable from the popular ideas of its composition and also that now and then even serious scientists develop especially curious projections far in advance of literary fantasy when describing the lunar inhabitants."-Tilman Spreckelsen, Frankfurter Allgemeine Zeitung

-- Tilman Spreckelsen * Frankfurter Allgemeine Zeitung *
"Brunner is a good non-fiction author for a broad readership. He refrains from pelting us with technical terms, while still giving the impression that he has a good command of his topic. He is particularly attracted to the relationships between nature and culture. (...) He often manages to provide vivid descriptions: he lets scientists from several centuries speak about the moon, tells stories of healing and ritual regarding the night's heavenly body, and dovetails the history of the moon film with the Cold War."-Lars von der Goenna, Westdeutsche Allgemeine Zeitung -- Lars von der Gonna * Westdeutsche Allgemeine Zeitung *
"... one will find here a feast of historical connection and reactions to the moon." -San Francisco Book Review * San Francisco Book Review *
"...a nimble, fast-moving survey of the silvery moon's impact upon us and our world. Brunner looks at the moon's influence upon tides, of course, and also its place in early psychology, the occult, popular culture and as a necessary first step on humanity's journey to Mars." -Nick Owchar, Los Angeles Times -- Nick Owchar * Los Angeles Times *
"A wry compendium of all things moon-related, this enjoyable book takes in everything from the popular song "Blue Moon" to Pink Floyd's The Dark Side of the Moon, from Georges Melies's pioneering film A Trip to the Moon to Kubrick's 2001 and Duncan Jones's Moon."-The Guardian * The Guardian *

Selected as a Choice Outstanding Academic Title for 2011 in the Astronautics and Astronomy category.

"Superb non-fiction books. ... They are archives unto themselves. A repository for dreams, visions, and fears."-Die Zeit

* Die Zeit *
Bernd Brunner is a freelance writer. He is the author of other successful works intersecting history, science, and literature, including Bears and The Ocean at Home. He lives in Berlin, Germany.
GOR003547336
9780300177695
0300177690
Moon: A Brief History by Bernd Brunner
Bernd Brunner
Used - Very Good
Paperback
Yale University Press
2011-08-02
304
N/A
Book picture is for illustrative purposes only, actual binding, cover or edition may vary.
This is a used book - there is no escaping the fact it has been read by someone else and it will show signs of wear and previous use. Overall we expect it to be in very good condition, but if you are not entirely satisfied please get in touch with us
Trustpilot