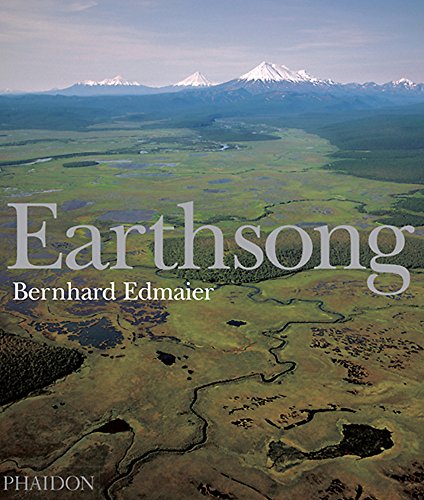 A spectacular collection of breathtaking aerial photographs of the earth's surface.

Earthsong comprises a spectacular collection of breathtaking aerial photographs of the earth's surface, taken from all over the world. This book offers a mesmerizing perspective of the world in which we live, but which we rarely get to glimpse so completely. These images reveal wide stretches of the earth's surface that are untouched by human influence, where nature reigns, natural phenomena dominating and defining the landscape. Photographed from above, the tremendous sights of volcanoes, glaciers, coral reefs, canyons, sea beds and rivers reveal the delicate and monumental natural patterns that are etched on the earth's crust. Bernhard Edmaier's photographs capture the breathtaking beauty of these unspoiled areas and document phenomena that may last for a few brief moments or remain for millions of years.

Earthsong divides the planet into four parts, reflecting the dominant environments of each zone - Aqua (water), Barren (tundra), Desert (lands with minimal precipitation) and Green (forest and grass land). Thus the icy expanses of the Arctic appear with the warm oceans of the Pacific; we see coastal deserts alongside underwater deserts, glacial deserts and sand deserts; the lush green forests of Europe are juxtaposed with desert flowers; and floating river algae and icy alpine summits appear with the barren wastelands of the far north. Earthsong celebrates the immeasurable magnificence of our planet and covers areas from the Bahamas to Ethiopia, New Zealand to the United States, Europe, Ecuador and the Atlantic.

'As anxieties concerning the welfare of our fragile planet become ever more prevalent, the arrival of a remarkable collection of aerial photographs is a timely counterbalance...Earthsong...is a deeply gratifying antidote to the horrors of the kind of environmental malaise, such as pollution, deforestation and global warming, which currently confront us...an exhilarating journey.' (Royal Wings, Jordanian Airlines magazine)

'This isn't so much a song, as a rhapsodic symphony to the untouched parts of our planet. Earthsong shows the world from [a] God's-eye view, and you can understand that he might of seen it and thought that it was good.' (Gay Times)

'Brilliant...Earthsong is more than just a 'coffee-table' book - it is a visual polemic. In Germany it is titled Das Lied von der Erde - Song of the Earth, after Gustav Mahler's composition of 1908. If we continue our policies of plunder and pillage, Edmaier is reminding us, there will be no Lied and no Erde, ever again. For now, though, the Earth is still singing.' (Mail on Sunday)

'Can send you into a trance of eloquent natural geometry.'(Daily Telegraph)

'Coffee-table book of the year...a vivid demonstration of the fragility of our environment.' (The Oxford Times)

'Reveals the geological forces that continue to shape our planet...the shapes and colours are startling.' (Daily Telegraph)

'Filled with spectacular photographs of the earth's patterned surface, Earthsong may be this year's best coffee table book. The major environments of the planet are seen from above in a gorgeous display of geological diversity; each photo is explained with brief but informative text.' (The Union Newspaper)

'Art meets earth science in Earthsong, a gallery of spectacular aerial photographs by Bernhard Edmaier. Reproduced in full color on oversized pages, the patterns of deserts, glaciers, volcanoes, and grassland often resemble abstract paintings. But the wisdom of this book lies in its pairing of beautiful images with brief explanations by geologist Angelika Jung-Huttl of the forces that produced these startling effects.' (Amazon.com)

'Earthsong is a book of jaw-dropping grandeur.' (Maclean's)

'How often can you claim to have given someone the world? Bernhard Edmaier's stunning aerial shots of the Earth's environments are...abstract, beautiful images.' (Harper's Bazaar)

'Bernhard Edmaier raises the art of aerial photography to new heights. His images are hauntingly impressionistic, even as they display a clarity of tone and texture that recalls the sharp-focus realism of Eliot Porter...More than 200 such images fill this sumptuous album: views of deserts, forests, oceans, and tundra that are both startling in impact and enlightening in detail.' (Natural History Magazine)

'What sends the book into literary orbit is geologist Angelika Jung-Huttl's fascinating text describing how air, fire, water, and rock became the subjects in Edmaier's lens.' (Outside Magazine)

Bernhard Edmaier trained as a civil engineer and geologist and has photographed the earth's surface for over 15 years. His extraordinary photographs are the result of meticulously planned and researched expeditions that take him from the endless deserts of Africa to the ice plains of Iceland and the coral cliffs of the Great Barrier Reef. His abstractly beautiful compositions offer an awe-inspiring view of our planet.

Angelika Jung-Huttl is a geologist and writer who contributes to the Suddeutsche Zeitung, the Berliner Zeitung and pm-history. A geologist by training, she has collaborated closely with Edmaier for 10 years and written several books on volcanoes, ice and glaciers.

Introduction - by author to be confirmed; Chapters: Aqua; Arid; Green; and Barren; Index; Picture credits & Acknowledgements.
GOR003366076
Earthsong by Bernhard Edmaier
Bernhard Edmaier
Used - Very Good
Hardback
Phaidon Press Ltd
2004-10-24
232
0714844519
9780714844510
N/A
Book picture is for illustrative purposes only, actual binding, cover or edition may vary.
This is a used book - there is no escaping the fact it has been read by someone else and it will show signs of wear and previous use. Overall we expect it to be in very good condition, but if you are not entirely satisfied please get in touch with us
Trustpilot