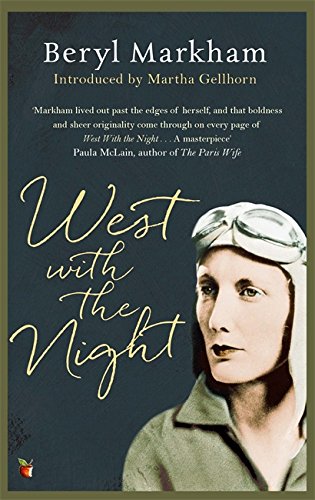 West With The Night
by Beryl Markham

* ERNEST HEMINGWAY wrote to a friend: 'She can write rings around all of us . . . I wish you would get it and read it because it is really a bloody wonderful book'
* introduction by MARTHA GELLHORN

West With The Night Summary

West With The Night by Beryl Markham

WEST WITH THE NIGHT appeared on 13 bestseller lists on first publication in 1942. It tells the spellbinding story of Beryl Markham -- aviator, racehorse trainer, fascinating beauty -and her life in the Kenya of the 1920s and 30s.

Markham was taken to Kenya at the age of four. As an adult she was befriended by Denys Finch-Hatton, the big-game hunter of OUT OF AFRICA fame, who took her flying in his airplane. Thrilled by the experience, Markham went on to become the first woman in Kenya to receive a commercial pilot's license.

In 1936 she determined to fly solo across the Atlantic -- without stopping. When Charles Lindbergh did the same, he had the wind behind him. Markham, by contrast, had a strong headwind against her and a plane that only flew up to 163 mph. On 4 September, she took off ... Several days later, she crash-landed in Nova Scotia and became an instant celebrity.

West With The Night Reviews

A beautiful and evocative story that deserves to be ranked alongside Karen Blixen's OUT OF AFRICA * Time Out *
A poet's feeling for her land, an adventurer's response to life * New York HERALD Tribune *
Markham made her name as one of the first pilots to fly solo across the Atlantic in 1936 . . . A vivacious account of an eccentric life, with Markham's headstrong nature and spirit shining out * Daily Mail *

Born in England in 1902, Markham grew up in East Africa. She apprenticed as a trainer and breeder of racehorses and in the 1930s became an African bush pilot. In 1936 she became the first person to fly solo across the Atlantic from east to west. Markham died suddenly in 1986.

GOR001231057
West With The Night by Beryl Markham
Beryl Markham
Virago Modern Classics
Used - Very Good
Paperback
Little, Brown Book Group
1984-09-17
320
0860685411
9780860685418
N/A
Book picture is for illustrative purposes only, actual binding, cover or edition may vary.
This is a used book - there is no escaping the fact it has been read by someone else and it will show signs of wear and previous use. Overall we expect it to be in very good condition, but if you are not entirely satisfied please get in touch with us.