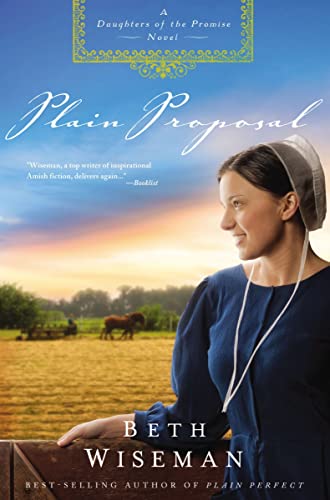 Used Price
$16.99
inc. GST
Free Shipping in Australia
Miriam secretly vows to follow Saul no matter what the future holds. She never thought that future might take them away from their Amish community.
Reviews:
Trustpilot
Very Good Good Well Read

Miriam Raber takes a bold stand when her Amish boyfriend considers leaving their community. "Whatever he chooses, I'm going with him."

Miriam Raber enjoys life in her Old Order Amish community, and she is hopeful that Saul Fisher will propose to her soon. But when Saul starts talking about leaving the only world either of them has ever known, Miriam imagines what her life might look like as an Englischer. One thing she knows for certain, she loves Saul and feels he's the one God has chosen for her. But Saul's indecision has come at an inconvenient time as Miriam is noticing advances from Jesse Dienner, a man she went to school with and who wants to marry.

Complicating matters is the arrival of Miriam's cousin, Shelby, a worldly Englisch girl sent to live with Miriam's family following trouble back home.

Who will Miriam choose a life with-and who will choose to stay in the Old Order Amish community?

Bestselling and award-winning author Beth Wiseman has sold over two million books. She is the recipient of the coveted Holt Medallion, a two-time Carol Award winner, and has won the Inspirational Reader's Choice Award three times. Her books have been on various bestseller lists, including CBD, CBA, ECPA, and Publishers Weekly. Beth and her husband are empty nesters enjoying country life in south central Texas. Visit her online at BethWiseman.com; Facebook: AuthorBethWiseman; Twitter: @BethWiseman; Instagram: @bethwisemanauthor.

GOR004441348
Plain Proposal by Beth Wiseman
Beth Wiseman
A Daughters of the Promise Novel
Used - Very Good
Paperback
Thomas Nelson Publishers
2011-03-01
304
1595548505
9781595548504
N/A
Book picture is for illustrative purposes only, actual binding, cover or edition may vary.
This is a used book - there is no escaping the fact it has been read by someone else and it will show signs of wear and previous use. Overall we expect it to be in very good condition, but if you are not entirely satisfied please get in touch with us.