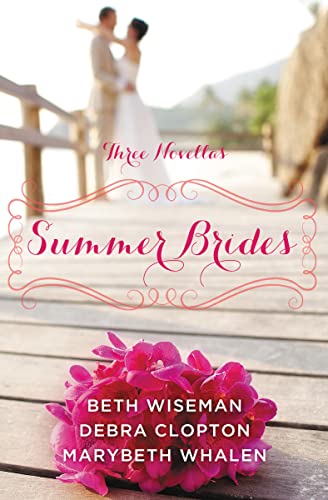 Happily ever after begins today. The honor of your presence is requested at three summer weddings . . .

A June Bride by Marybeth Whalen

Wynne Hardy never thought she'd get engaged on a reality TV show, but when she met Andy the two of them hit it off. Now he's asked her to marry him, and they're all set to wed on live TV in a seaside ceremony. But just as Wynne thinks all her dreams are coming true, her ex-boyfriend walks back into her life at the worst possible time. Steve broke her heart years ago, and she's still sorting through her feelings for him. Will Wynne go through with her televised wedding and be the perfect June bride the network is looking for?

A July Bride by Beth Wiseman

It was the happiest day of her life when Alyssa Pennington walked down the aisle to be united with the man of her dreams. But when Brendan left her at the altar, Alyssa was consumed by humiliation, embarrassment, and a broken heart that wouldn't allow her to trust anyone. Brendan Myers knows he will spend the rest of his life regretting what he did to Alyssa, the only woman he's ever loved. Now he plans to win her back. But winning back his bride might prove much more difficult than he can imagine.

An August Bride by Debra Clopton

After a cowboy broke her heart, Kelsey Wilcox traded in her boots for flip-flops and a bistro on the beautiful sandy beach of Corpus Christi. Two years later, still not believing in happy endings, she is about to endure a weekend of torture at her cousin's beach wedding. Brent Corbin has had his share of bad luck with women and isn't looking for love or looking forward to the weekend of wedding festivities as a groomsman for his friend, but his attention is instantly captured by Kelsey. Thrown together through the weekend and with the meddlesome encouragement from some matchmakers, Brent is determined to pursue Kelsey and change her mind about cowboys.

Beth Wiseman is the award-winning and bestselling author of the Daughters of the Promise, Land of Canaan, and Amish Secrets series, as well as novellas that have been included in many bestselling collections such as An Amish Year and An Amish Garden. Visit her online at BethWiseman.com; Facebook: AuthorBethWiseman; Twitter: @BethWiseman. Marybeth Whalen is the wife of Curt and mom of six children. She is the cofounder of She Reads, an online book club focused on spotlighting the best in women's fiction. Marybeth is the author of The Mailbox, She Makes It Look Easy, The Guest Book, and The Wishing Tree. Marybeth and her family live in North Carolina. Visit her website at www.marybethwhalen.com. Debra Clopton is a multi-award winning novelist who was first published in 2005 and has more than 22 novels to her credit. Along with her writing, Debra helps her husband teach the youth at their local Cowboy Church. Debra is the author of the acclaimed Mule Hollow Matchmaker Series, the place readers tell her they wish was real. Her goal is to shine a light toward God while she entertains readers with her words. Visit her online at www.debraclopton.com, Facebook: debra.clopton, Twitter: @debraclopton.

GOR008214673
Summer Brides: A Year of Weddings Novella Collection by Beth Wiseman
Beth Wiseman
A Year of Weddings Novella
Used - Very Good
Paperback
Zondervan
2015-05-12
336
0310339154
9780310339151
N/A
Book picture is for illustrative purposes only, actual binding, cover or edition may vary.
This is a used book - there is no escaping the fact it has been read by someone else and it will show signs of wear and previous use. Overall we expect it to be in very good condition, but if you are not entirely satisfied please get in touch with us.