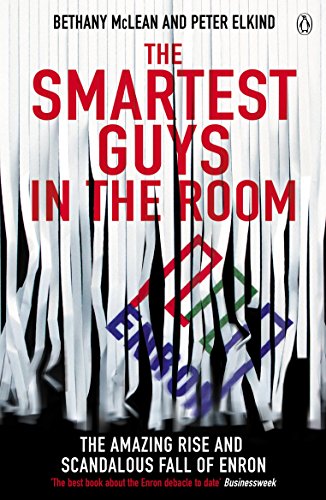 The Smartest Guys in the Room
by Bethany McLean

In Stock
$17.99
+10% GST
The fall of Enron was much more than a business scandal. Not only did the events of October 2001 have a more damaging effect on the markets than 9/11 but, like Watergate, it was an event that sent shivers throughout the whole world. This is an in-depth investigation of the fall of Enron.
Very Good Good Well Read
Only 1 left

The Smartest Guys in the Room Summary

The Smartest Guys in the Room: The Amazing Rise and Scandalous Fall of Enron by Bethany McLean

What went wrong with American business at the end of the 20th century?

Until the spring of 2001, Enron epitomized the triumph of the New Economy. Feared by rivals, worshipped by investors, Enron seemingly could do no wrong. Its profits rose every year; its stock price surged ever upward; its leaders were hailed as visionaries.

Then a young Fortune writer, Bethany McLean, wrote an article posing a simple question - how, exactly, does Enron make its money?

Within a year Enron was facing humiliation and bankruptcy, the largest in US history, which caused Americans to lose faith in a system that rewarded top insiders with millions of dollars, while small investors lost everything. It was revealed that Enron was a company whose business was an illusion, an illusion that Wall Street was willing to accept even though they knew what the real truth was. This book - fully updated for the paperback - tells the extraordinary story of Enron's fall.

The Smartest Guys in the Room Reviews

...the most comprehensive picture yet of how the company went off the rails. The sheer accumulation of detail makes it possible for the first time to understand how Enron got away with its blend of hubris and incompetence for so long. . . This is more than a business story. It is also about what can happen to any institution when weak and complacent leadership allows itself to be swept along by strong vested interests and the mood of the times. * Richartd Lambert, ex editor of Financial Times and member of the Bank of England's Monetary Policy Committee *

Bethany McLean and Peter Elkind are Fortune senior writers. McLean's March 2001 article in Fortune, "Is Enron Overpriced?," was the first in a national publication to openly question the company's dealings. Elkind, an award-winning investigative reporter, has written for The New York Times Magazine and The Washington Post.

GOR002006640
The Smartest Guys in the Room: The Amazing Rise and Scandalous Fall of Enron by Bethany McLean
Bethany McLean
Used - Good
Paperback
Penguin Books Ltd
2004-09-30
480
0141011459
9780141011455
N/A
Book picture is for illustrative purposes only, actual binding, cover or edition may vary.
The book has been read but remains in clean condition. All pages are intact and the cover is intact. Some minor wear to the spine.