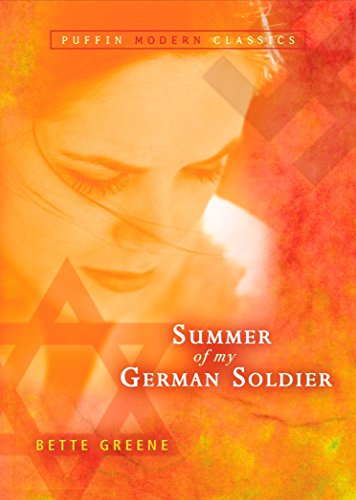 Summer of My German Soldier
by Bette Greene

In Stock
$11.99
+10% GST
When German prisoners of war are brought to her Arkansas town during World War II, 12-year-old Patty, a Jewish girl, befriends one of POWs and must deal with the consequences of that friendship. A 1973 National Book Award Finalist and an ALA Notable Book.
Very Good
Only 2 left

Summer of My German Soldier Summary

Summer of My German Soldier by Bette Greene

The summer that Patty Bergen turns twelve is a summer that will haunt her forever. When her small hometown in Arkansas becomes the site of a camp housing German prisoners during World War II, Patty learns what it means to open her heart. Even though she's Jewish, she begins to see a prison escapee, Anton, not as a Nazi, but as a lonely, frightened young man with feelings not unlike her own.

In Anton, Patty finds someone who softens the pain of her own father's rejection and who appreciates her in a way her mother never will. While patriotic feelings run high, Patty risks losing family, friends -- even her freedom -- for this dangerous friendship. It is a risk she has to take and one she will have to pay a price to keep.

Like Beth Lambert, Bette Greene grew up in a small town in Arkansas. Her first novel, Summer of My German Soldier, won unanimous critical acclaim and became an immediate best-seller. Bette Greene lives in Brookline, Massachusetts.

GOR001980193
Summer of My German Soldier by Bette Greene
Bette Greene
Used - Very Good
Paperback
Penguin Books Ltd
2011-02-17
240
0142406511
9780142406519
N/A
Book picture is for illustrative purposes only, actual binding, cover or edition may vary.
This is a used book - there is no escaping the fact it has been read by someone else and it will show signs of wear and previous use. Overall we expect it to be in very good condition, but if you are not entirely satisfied please get in touch with us.