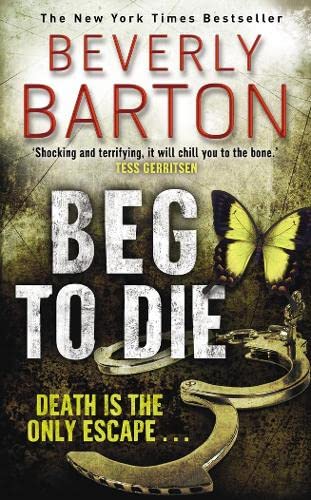 Beg to Die
by Beverly Barton

Pray for mercy with this spine-tingling thriller, for fans of Karin Slaughter and Tess Gerritsen.

Beg to Die by Beverly Barton

Pray for mercy with this spine-tingling thriller, for fans of Karin Slaughter and Tess Gerritsen.

Cherokee Pointe, Tennessee has seen some murder before, but nothing like that which has claimed the life of playboy Jamie Upton. The crime is so vicious, so personal and filled with hatred, the authorities are certain it had to be someone he knew.

Number one suspect is Jamie's former lover, Jazzy Talbot. But Jazzy knows she didn't kill Jamie, just as she knows she's being stalked by a hunter waiting to pounce.

As the same killer strikes again and again with the same chilling signature, Jazzy is running scared. With no one to believe her innocence except enigmatic drifter Caleb McCord, Jazzy plunges into the small town's long-buried secrets. Each startling truth brings her dangerously close to a killer determined to make Jazzy beg to die....

"Not for the faint of heart! Shocking and terrifying, it will chill you to the bone." Tess Gerritsen

`This gripping crime novel ... [is] not for the faint-hearted ... you'll be guessing until the very end.'
Closer

An avid reader since childhood, Beverly Barton wrote her first book at the age of nine. Since then, she has gone on to write well over seventy novels and is a New York Times bestselling author.

GOR001671026
Beg to Die by Beverly Barton
Beverly Barton
Used - Very Good
Paperback
HarperCollins Publishers
2010-03-18
416
184756142X
9781847561428
N/A
Book picture is for illustrative purposes only, actual binding, cover or edition may vary.
This is a used book - there is no escaping the fact it has been read by someone else and it will show signs of wear and previous use. Overall we expect it to be in very good condition, but if you are not entirely satisfied please get in touch with us.