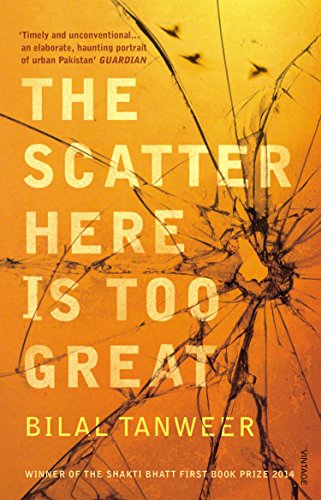 The Scatter Here is Too Great
by Bilal Tanweer

In Stock
$17.99
inc. GST
Shortlisted for the 2015 DSC Prize for South Asian LiteratureWinner of the Shakti Bhatt First Book Prize 2014The Scatter Here Is Too Great heralds a major new voice from Pakistan with a stunning debut - a novel told in a rich variety of distinctive voices that converge at a single horrific event: a bomb blast at a station in the heart of the city.
Very Good
5 in stock

The Scatter Here is Too Great Summary

The Scatter Here is Too Great by Bilal Tanweer

Shortlisted for the 2015 DSC Prize for South Asian Literature Winner of the Shakti Bhatt First Book Prize 2014 The Scatter Here Is Too Great heralds a major new voice from Pakistan with a stunning debut - a novel told in a rich variety of distinctive voices that converge at a single horrific event: a bomb blast at a station in the heart of the city. Comrade Sukhansaz, an old communist poet, is harassed on a bus full of college students minutes before the blast. His son, a wealthy middle-aged businessman, yearns for his own estranged child. A young man, Sadeq, has a dead-end job snatching cars from people who have defaulted on their bank loans, while his girlfriend spins tales for her young brother to conceal her own heartbreak. An ambulance driver picking up the bodies after the blast has a shocking encounter with two strange-looking men whom nobody else seems to notice. And in the midst of it all, a solitary writer, tormented with grief for his dead father, struggles to find words. In a style that is at once inventive and deeply moving, Tanweer reveals the pain, loneliness and longing of these characters and celebrates the power of the written word to heal individuals and communities plagued by violence. Elegantly weaving together a striking portrait of a city and its people, The Scatter Here Is Too great is a love story written to Karachi - as vibrant and varied in its characters, passions, and idiosyncrasies as the city itself.

The Scatter Here is Too Great Reviews

"A beautiful debut. A blood-soaked love letter to Karachi." -- Mohammed Hanif
"Timely and unconventional... Its beautiful fragments coalesce to form an elaborate, haunting portrait of urban Pakistan, one that is rich with acute sociological detail and subtle existential contemplation." -- Hirsh Sawhney * Guardian *
"A superb and genuinely exciting debut. By the end of this book Tanweer had made me see that certain things are more beautiful and valuable for having been broken." -- Nadeem Aslam
"Bilal Tanweer uses his many gifts as a writer to evoke a Karachi of humour, violence, frustration, love - and breathtaking stories at every turn. A wonderful debut." -- Kamila Shamsie
"Bilal Tanweer has written a modern love letter - furious, passionate, playful, and longing - to Pakistan. And in his brilliant hands he tells the universal story of home." -- Ben Marcus

Bilal Tanweer was born and raised in Karachi. His fiction, poetry and translations have appeared in various international journals including Granta, Vallum, The Caravan and Words Without Borders. He was selected as a Granta new voice in 2011 and was named an Honorary Fellow of the International Writing Progarm at the University of Iowa. He lives in Lahore.

GOR008010574
The Scatter Here is Too Great by Bilal Tanweer
Bilal Tanweer
Used - Very Good
Paperback
Vintage Publishing
2015-08-13
224
0099589842
9780099589846
Short-listed for DSC South Asian Literature Prize 2015 (UK)
Book picture is for illustrative purposes only, actual binding, cover or edition may vary.
This is a used book - there is no escaping the fact it has been read by someone else and it will show signs of wear and previous use. Overall we expect it to be in very good condition, but if you are not entirely satisfied please get in touch with us.