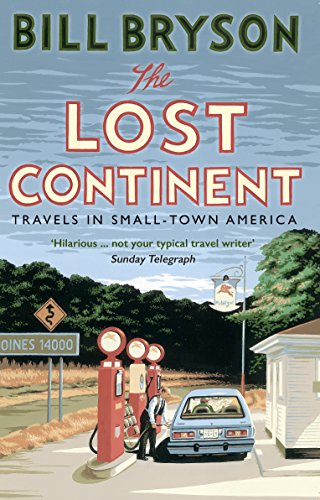 The Lost Continent
by Bill Bryson

In Stock
$19,49
inc. GST
lost to him because he had become a stranger in his own land.

Bryson's acclaimed first success, The Lost Continent is a classic of travel literature - hilariously, stomach-achingly, funny, yet tinged with heartache - and the book that first staked Bill Bryson's claim as the most beloved writer of his generation.

The Lost Continent: Travels in Small-Town America by Bill Bryson

'I come from Des Moines. Somebody had to'

And, as soon as Bill Bryson was old enough, he left. Des Moines couldn't hold him, but it did lure him back. After ten years in England, he returned to the land of his youth, and drove almost 14,000 miles in search of a mythical small town called Amalgam, the kind of trim and sunny place where the films of his youth were set. Instead, his search led him to Anywhere, USA; a lookalike strip of gas stations, motels and hamburger outlets populated by lookalike people with a penchant for synthetic fibres. He discovered a continent that was doubly lost; lost to itself because blighted by greed, pollution, mobile homes and television; lost to him because he had become a stranger in his own land.

Bryson's acclaimed first success, The Lost Continent is a classic of travel literature - hilariously, stomach-achingly, funny, yet tinged with heartache - and the book that first staked Bill Bryson's claim as the most beloved writer of his generation.

High-spirited... hilarious * Observer *
Hilarious... he can be suave, sarcastic and very funny... not your typical travel writer * Sunday Telegraph *
Funny as this wonderful book is, it is also a serious indictment of the American way of life and the direction in which it is going... he is genuinely shocked, as we are, by the statistics of affluence, poverty, crime and culture that he drops in hither and thither * Irish Times *
A very funny performance, littered with wonderful lines and memorable images * Literary Review *

GOR008131780
The Lost Continent: Travels in Small-Town America by Bill Bryson
Bill Bryson
Bryson
Used - Well Read
Paperback
Transworld Publishers Ltd
2015-11-05
384
1784161802
9781784161804
N/A
Book picture is for illustrative purposes only, actual binding, cover or edition may vary.
This is a used book - there is no escaping the fact it has been read by someone else and it will show signs of wear and previous use. Overall we expect it to be in very good condition, but if you are not entirely satisfied please get in touch with us.