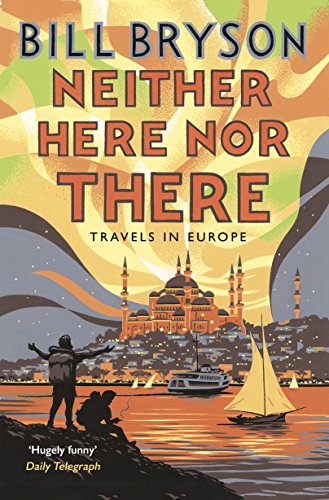 Neither Here, Nor There
by Bill Bryson

Bill Bryson's first travel book, The Lost Continent, was unanimously acclaimed as one of the funniest books in years.

Neither Here, Nor There Summary

Neither Here, Nor There: Travels in Europe by Bill Bryson

Bill Bryson's first travel book, The Lost Continent, was unanimously acclaimed as one of the funniest books in years. In Neither Here nor There he brings his unique brand of humour to bear on Europe as he shoulders his backpack, keeps a tight hold on his wallet, and journeys from Hammerfest, the northernmost town on the continent, to Istanbul on the cusp of Asia. Fluent in, oh, at least one language, he retraces his travels as a student twenty years before.

Whether braving the homicidal motorists of Paris, being robbed by gypsies in Florence, attempting not to order tripe and eyeballs in a German restaurant or window-shopping in the sex shops of the Reeperbahn, Bryson takes in the sights, dissects the culture and illuminates each place and person with his hilariously caustic observations. He even goes to Liechtenstein.

Neither Here, Nor There Reviews

A breezy and entertaining account of what it is like to be utterly at sea in a continent most of his readers will regard as familiar * Independent on Sunday *
Hugely funny (not snigger-snigger funny, but great-big-belly-laugh-till-you-cry funny) * Daily Telegraph *
Undoubtedly the most enjoyable travel book of the year * Time Out *
This is the travel book that every Inter-Rail vagrant would love to write; the Animal House of the genre * New Statesman *

GOR007346195
Neither Here, Nor There: Travels in Europe by Bill Bryson
Bill Bryson
Bryson
Used - Very Good
Paperback
Transworld Publishers Ltd
2015-11-05
320
1784161829
9781784161828
N/A
Book picture is for illustrative purposes only, actual binding, cover or edition may vary.
This is a used book - there is no escaping the fact it has been read by someone else and it will show signs of wear and previous use. Overall we expect it to be in very good condition, but if you are not entirely satisfied please get in touch with us.