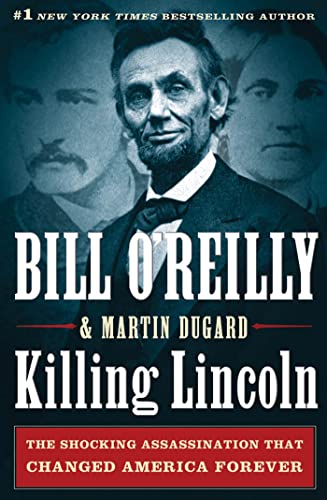 In the midst of the patriotic celebrations in Washington, DC, John Wilkes Booth murders Abraham Lincoln at Ford's Theatre. Lafayette C Baker, a brilliant New York detective, unravels the string of clues leading to Booth, while federal forces track his accomplices. This title recounts one of the most dramatic stories in American history.

The anchor of "The O'Reilly Factor" recounts one of the most dramatic stories in American history - how one gunshot changed the country forever. In the spring of 1865, the Civil War finally comes to an end after a series of incredibly bloody battles. President Abraham Lincoln's generous terms for Robert E. Lee's surrender are devised to fulfill Lincoln's dream of healing a divided nation, with the former Confederates allowed to reintegrate into American society. One man and his band of murderous accomplices, perhaps reaching into the highest ranks of the U.S. government, are not appeased. In the midst of the patriotic celebrations in Washington, D.C., John Wilkes Booth - charismatic ladies' man and impenitent racist - murders Abraham Lincoln at Ford's Theatre. A furious manhunt ensues and Booth immediately becomes the country's most wanted fugitive. Lafayette C. Baker, a brilliant but enigmatic New York detective and former Union spy, unravels the string of clues leading to Booth, while federal forces track his accomplices. The thrilling chase ends in a fiery shootout and a series of court-ordered executions - including that of the first woman ever executed by the U.S. government, Mary Surratt. With an unforgettable cast of characters, vivid historical detail, and page-turning action, "Killing Lincoln" is history that reads.

"As a history major, I wish my required reading had been as well written as this truly vivid and emotionally engaging account of Lincoln's assassination. And as a former combat infantry officer, I found myself running for cover at the Civil War battle scenes. This is the story of an American tragedy that changed the course of history. If you think you know this story, you don't until you've read Killing Lincoln. Add historian to Bill O'Reilly's already impressive r sum ." --Nelson DeMille, author of The Lion and The Gold Coast

"Killing Lincoln is a must read historical thriller. Bill O'Reilly recounts the dramatic events of the spring of 1865 with such exhilarating immediacy that you will feel like you are walking the streets of Washington, DC, on the night that John Wilkes Booth shot Abraham Lincoln. This is a hugely entertaining, heart-stopping read." --Vince Flynn, author of American Assassin

"If Grisham wrote a novel about April 1865...it might well read like Killing Lincoln." --Peter J. Boyer, Newsweek

Bill O'Reilly's success in broadcasting and publishing is unmatched. The iconic anchor of The O'Reilly Factor led the program to the status of the highest rated cable news broadcast in the nation for sixteen consecutive years. His website BillOReilly.com is followed by millions all over the world.

In addition, he has authored an astonishing 12 number one ranked non-fiction books including the historical "Killing" series. Mr. O'Reilly currently has 17 million books in print.

Bill O'Reilly has been a broadcaster for 42 years. He has been awarded three Emmy's and a number of other journalism accolades. He was a national correspondent for CBS News and ABC News as well as a reporter-anchor for WCBS-TV in New York City among other high profile jobs.

Bill O'Reilly lives on Long Island where he was raised. His philanthropic enterprises have raised tens of millions for people in need and wounded American veterans.

Martin Dugard is the New York Times bestselling author of several books of history. He and his wife live in Southern California with their three sons.

GOR009044478
9780805093070
0805093079
Killing Lincoln: The Shocking Assassination That Changed America by Bill O'Reilly
Bill O'Reilly
Used - Like New
Hardback
Henry Holt & Company Inc
2011-09-28
288
N/A
Book picture is for illustrative purposes only, actual binding, cover or edition may vary.
The book has been read, but looks new. The book cover has no visible wear, and the dust jacket is included if applicable. No missing or damaged pages, no tears, possible very minimal creasing, no underlining or highlighting of text, and no writing in the margins
Trustpilot