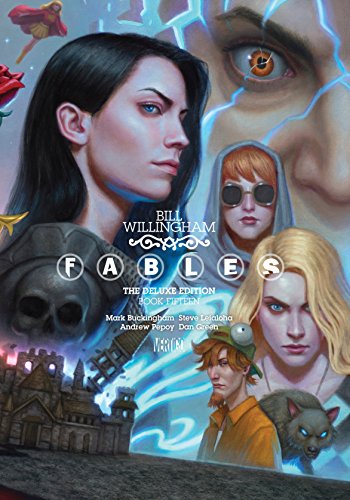 Acclaimed by critics and readers alike, these modern classics of comic book storytelling are now collected for the first time in a series of beautiful hardcover volumes. FABLES: THE DELUXE EDITION BOOK FIFTEEN brings the award-winning series to a close with the epic tales "Happily Ever After" and "Farewell" from issues #141-150 of the award-winning Vertigo series, and features a new introduction by FABLES creator Bill Willingham as well as a special sketchbook section from artist Mark Buckingham.

Imagine that all the characters from the world's most beloved storybooks were real and living among us, with all of their powers intact. How would they cope with life in our mundane, un-magical reality?

The answer can be found in FABLES, Bill Willingham's celebrated reimagining of the venerable fairy tale canon. From Snow White and the Big Bad Wolf to Goldilocks and Little Boy Blue, the folk characters of old are reborn here as exiles living in the magically camouflaged New York City neighborhood of Fabletown.

"Clever, enjoyable . . . an excellent series in the tradition of Sandman, one that rewards careful attention and loyalty."--Publishers Weekly

"One of the best damn series ever written."--Ain't It Cool News

Bill Willingham has been writing, and sometimes drawing, comics for more than 20 years. During that time he's had work published by nearly every comics publisher in the business, and he's created many critically acclaimed comic book series, including ELEMENTALS, CONVENTRY, PROPOSITION PLAYERS and of course the seminal Vertigo series FABLES, as well as its spin-off series FAIREST, JACK OF FABLES and THE LITERALS. His work has been nominated for many awards, including the Eisner, Harvey and Ignatz comic industry awards and the International Horror Guild award. He lives somewhere near a good poker room.

GOR010757508
Fables The Deluxe Edition Book Fifteen by Bill Willingham
Bill Willingham
Used - Like New
Hardback
DC Comics
2017-11-28
368
1401274641
9781401274641
N/A
Book picture is for illustrative purposes only, actual binding, cover or edition may vary.
The book has been read, but looks new. The book cover has no visible wear, and the dust jacket is included if applicable. No missing or damaged pages, no tears, possible very minimal creasing, no underlining or highlighting of text, and no writing in the margins.