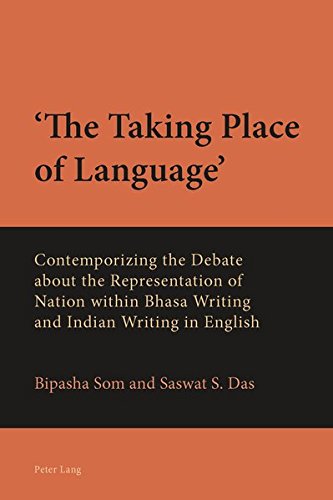 'The Taking Place of Language'
by Bipasha Som

Used Price
$58.99
inc. GST
Free Shipping in Australia
This book seeks to critically engage with issues arising out of Indian writing in English and Bhasa writing. It interrogates Amitav Ghosh's The Hungry Tide and Buddhadeb Guha's Bhasa text Kojagar (translated in English as The Bounty of the Goddess). Interrogation of textual instability in both suggests the limitation of maintaining diametric perspectives.
Very Good

'The Taking Place of Language' Summary

'The Taking Place of Language': Contemporizing the Debate about the Representation of Nation within Bhasa Writing and Indian Writing in English by Bipasha Som

This book seeks to critically engage with issues arising out of, and hotly debated within, Indian writing in English and its 'other': Bhasa writing. The central issue is the representation of nation in literary texts, which has divided these two literary traditions. At the heart of this book is a study of Amitav Ghosh's The Hungry Tide, which mirrors the newfound love of Indian writing in English for cosmopolitanism. Similarly, Buddhadeb Guha's Bhasa text Kojagar (translated in English as The Bounty of the Goddess by John W. Hood), is a text encapsulating Bhasa writing's fascination with unitary perspectives and structural aesthetics.
The interrogation of these two texts is first grounded in a broad survey of perspectives on the nation arising out of the West and India and an exploration of the ways in which the nation is represented across the corpus of Indian writing in English and Bhasa writing. This exploration sets the scene for the examination of the two texts, which stresses the performative and ludic dimension of language, thus breaking each text into multiple, opposing perspectives. The textual instability of the two texts which emerges indicates the limitation of texts in maintaining the diametric perspectives inherent in categorization.

Bipasha Som is UGC-NET qualified and earned her PhD from the Dept. of Humanities and Social Sciences, Indian Institute of Technology, Kharagpur. She currently teaches in the Department of English and Modern European Languages at Gautam Buddha University, Greater Noida, India. Prior to this she taught at Amity University Noida, India; Madras Christian College, Chennai, India and Birpara College (University of North Bengal), Jalpaiguri, India. She has published papers in scholarly journals and has presented papers at various national and international conferences. She has teaching and research interests and experience in varied areas ranging from Shakespeare to postmodern theory and writings and translation studies.
Saswat S. Das currently works in the Department of Humanities and Social Sciences, IIT Kharagpur as an Associate Professor. He carries out research in Critical Theory, Postmodern and Post Colonial Studies and Continental philosophy. His articles have been published in prestigious journals like Asiatic, Post-colonial Cultures and Societies, Journal of Contemporary Thought, Journal of Indian Council of Philosophical Research, History and Sociology of South Asia, Indian Literature and Maintenance of Boundary: theory and politics in Contemporary times.

GOR010741468
'The Taking Place of Language': Contemporizing the Debate about the Representation of Nation within Bhasa Writing and Indian Writing in English by Bipasha Som
Bipasha Som
Used - Very Good
Paperback
Peter Lang AG, Internationaler Verlag der Wissenschaften
2013-10-07
113
3034309074
9783034309073
N/A
Book picture is for illustrative purposes only, actual binding, cover or edition may vary.
This is a used book - there is no escaping the fact it has been read by someone else and it will show signs of wear and previous use. Overall we expect it to be in very good condition, but if you are not entirely satisfied please get in touch with us.