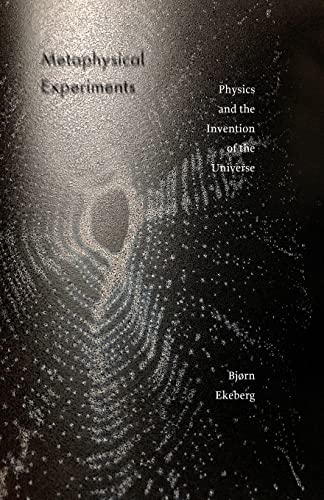 Metaphysical Experiments: Physics and the Invention of the Universe by Bjorn Ekeberg

The James Webb Space Telescope, when launched in 2021, will be the premier orbital observatory, capable of studying every phase of the history of the universe, from the afterglow of the Big Bang to the formation of our solar system. Examining the theoretical basis for key experiments that have made this latest venture in astrophysics possible, Bjorn Ekeberg reveals that scientific cosmology actually operates in a twilight zone between the physical and metaphysical.

Metaphysical Experiments explains how our current framework for understanding the universe, the Big Bang theory, is more determined by a deep faith in mathematical universality than empirical observation. Ekeberg draws on philosophical insights by Spinoza, Bergson, Heidegger, and Arendt; on the critical perspectives of Latour, Stengers, and Serres; and on cutting-edge physics research at the Large Hadron Collider, to show how the universe of modern physics was invented to reconcile a Christian metaphysical premise with a claim to the theoretical unification of nature.

By focusing on the nonmathematical assumptions underlying some of the most significant events in modern science, Metaphysical Experiments offers a critical history of contemporary physics that demystifies such concepts as the universe, particles, singularity, gravity, blackbody radiation, the speed of light, wave/particle duality, natural constants, black holes, dark matter, and dark energy. Ekeberg's incisive reading of the metaphysical underpinnings of scientific cosmology offers an innovative account of how we understand our place in the universe.

"In this provocative and sharply written account, Bjorn Ekeberg makes a radical case for the social construction of physics and its truths, urging that the mathematical unification of physical phenomena is not only physics' goal but also a deeply metaphysical requirement for its progress-progress put into doubt, not to say crisis, by the emergence of mathematical theories (such as multiverse or string theory) that seem 'untestable in any empirical sense and probably remain beyond the horizon of experimental physics.'"-Brian Rotman, author of Becoming Beside Ourselves: The Alphabet, Ghosts, and Distributed Human Being

"What if the basis of contemporary cosmology were false? This stirring question launches Bjorn Ekeberg on a lucid exploration of modern scientific history, leading to the recent marriage of cosmology with experimental particle physics. Well-informed in contemporary philosophy, Ekeberg provides a unique synthesis that will be of interest to philosophers of science and contemplative scientists alike."-Graham Harman, Southern California Institute of Architecture

Bjorn Ekeberg has a PhD from University of Victoria, Canada, and is an independent researcher and writer living in Oslo, Norway.

GOR010682303
9781517905705
1517905702
Metaphysical Experiments: Physics and the Invention of the Universe by Bjorn Ekeberg
Bjorn Ekeberg
Posthumanities
Used - Like New
Paperback
University of Minnesota Press
2019-03-01
208
N/A
Book picture is for illustrative purposes only, actual binding, cover or edition may vary.
The book has been read, but looks new. The book cover has no visible wear, and the dust jacket is included if applicable. No missing or damaged pages, no tears, possible very minimal creasing, no underlining or highlighting of text, and no writing in the margins
Trustpilot