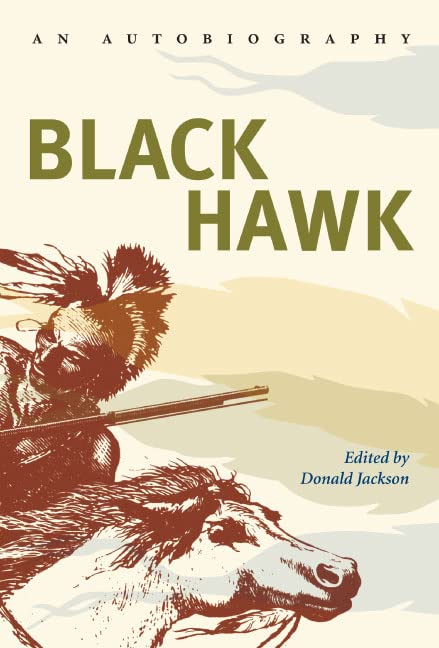 This story is told in the words of a tragic figure in American history - a hook-nosed, hollow-cheeked old Sauk warrior who lived under four flags while the Mississippi Valley was being wrested from his people.The author is Black Hawk himself - once pursued by an army whose members included Captain Abraham Lincoln and Lieutenant Jefferson Davis. Perhaps no Indian ever saw so much of American expansion or fought harder to prevent that expansion from driving his people to exile and death.He knew Zebulon Pike, William Clark, Henry Schoolcraft, George Catlin, Winfield Scott, and such figures in American government as President Andrew Jackson and Secretary of State Lewis Cass. He knew Chicago when it was a cluster of log houses around a fort, and he was in St. Louis the day the American flag went up and the French flag came down.He saw crowds gather to cheer him in Philadelphia, Baltimore, and New York - and to stone the driver of his carriage in Albany - during a fantastic tour sponsored by the government.And at last he dies in 1838, bitter in the knowledge that he had led men, women, and children of his tribe to slaughter on the banks of the Mississippi.After his capture at the end of the Black Hawk War, he was imprisoned for a time and then released to live in the territory that is now Iowa. He dictated his autobiography to a government interpreter, Antoine LeClaire, and the story was put into written form by J. B. Patterson, a young Illinois newspaperman. Since its first appearance in 1833, the autobiography has become known as an American classic.

"This new edition of a stirring autobiography is not only an American classic but is one of the relatively few accounts of American-Indian relations as they appeared to a leader of the Indians."--Americana
"Black Hawk is the only important Indian author from Illinois. . . . His life story . . . is now a classic of midwestern literature, a remarkable self-portrait by a complex individual who identified closely with the heritage of his tribe. At a time when [Native Americans] were being removed by government policy, it made the Indian perspective a part of the national consciousness. . . . The best edition of the 1833 text is by Donald Jackson."--John E. Hallwas, in Illinois Literature: The Nineteenth Century

Black Hawk is one of the thirty-five Illinois authors honored by having his name cast in stone in the Illinois State Library Building, which opened in 1990. The late Donald Jackson, author and editor of several important books in Western American history, was the editor in chief at the University of Illinois Press when this edition was first published in 1955.

GOR005360739
Black Hawk: AN AUTOBIOGRAPHY by Black Hawk
Black Hawk
Prairie State Books
Used - Very Good
Paperback
University of Illinois Press
1975-01-15
192
0252723252
9780252723254
N/A
Book picture is for illustrative purposes only, actual binding, cover or edition may vary.
This is a used book - there is no escaping the fact it has been read by someone else and it will show signs of wear and previous use. Overall we expect it to be in very good condition, but if you are not entirely satisfied please get in touch with us.