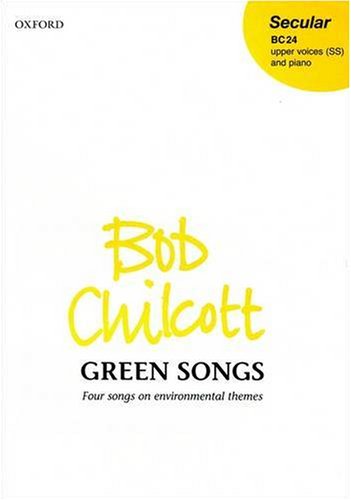 Used Price
13,49 $
inc. GST
Free Shipping in Australia
Four songs exploring a variety of 'green' issues for SS and piano The songs are fun, funky, and totally up-to-date, with jazzy rhythms and some rap-style verses to really get young choirs and their audiences grooving.
Very Good

Four songs exploring a variety of 'green' issues for SS and piano The songs are fun, funky, and totally up-to-date, with jazzy rhythms and some rap-style verses to really get young choirs and their audiences grooving.

Green Songs will find a useful place in the middle or lower secondary school curriculum, maybe supporting a cross-curricular project. * Music Teacher Oct 99 *
Chilcott has always been an effective writer of songs for young people's choirs and two more publications, The Swallow, a sweetly melancholic setting of a traditional Newfoundland melody and Green Songs, four environmental numbers with words as well as music from the composer, bear out his reputation . . . the cycle is good clean fun in every sense, featuring also a trademark gentle melancholy number ('Keep it good') and a zesty second movement, 'On your Bike', that could mark Chilcott out as a natural successor to Lionel Bart. * The Singer Oct 99 *

Bob Chilcott has become one of the world's most widely performed composers and arrangers of choral music. His compositional output reflects his wide taste in music styles and his commitment to writing music that is both singable and communicative. He has been involved in choral music most of his life he was a chorister and then a choral scholar in the choir of King's College, Cambridge, and was a member of the British vocal group The King's Singers for whom he made a number of popular arrangements of well-known songs from all genres. As well as being a full-time composer he is also a highly acclaimed choral conductor. He has been privileged to conduct many choirs all over the world. He is Principal Guest Conductor of The BBC Singers and in 2019 he was appointed Principal Conductor of Birmingham University Singers. His music has been widely recorded by many choirs and groups including The King's Singers, Tenebrae, and The BBC Singers.

GOR010738925
Green Songs by Bob Chilcott
Bob Chilcott
Used - Very Good
Hardback
Oxford University Press
1998-12-03
24
0193426315
9780193426313
N/A
Book picture is for illustrative purposes only, actual binding, cover or edition may vary.
This is a used book - there is no escaping the fact it has been read by someone else and it will show signs of wear and previous use. Overall we expect it to be in very good condition, but if you are not entirely satisfied please get in touch with us.