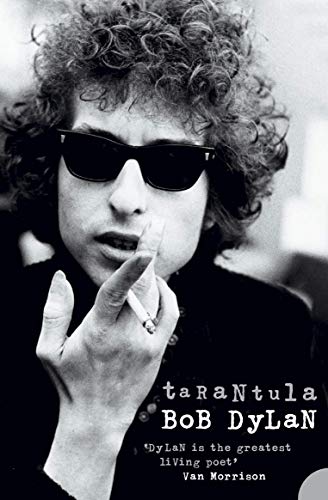 Written in 1966, `Tarantula' is a collection of poems and prose that evokes the turbulence of the times in which it was written, and gives a unique insight into Dylan's creative evolution.

Written in 1966, `Tarantula' is a collection of poems and prose that evokes the turbulence of the times in which it was written, and gives a unique insight into Dylan's creative evolution.

`The good samaritan coming in with the words "round & round we go" tattoed on his cheek / he tells the senator to stop insulting the lawyer.'

`Tarantula' captures Bob Dylan's preoccupations at a crucial juncture in his artistic development, showcasing the antic imagination of a folk poet laureate who was able to combine the humanity and compassion of his country roots with the playful surrealism of modern art. Angry, funny and strange, the poems and prose in this collection reflect the concerns we find in Dylan's most seminal music: a sense of protest, a verbal playfulness and spontaneity, and a belief in the artistic legitimacy of chronicling everyday life and eccentricity on the street.

`Tarantula' never made its publication date in Autumn 1966. To the delays added by Dylan's constant revisions was added the greater complication of his motorcyle accident - which left him with still undisclosed injuries and kept the book from publication until 1971. In the interim, it became a cult phenomenon, with `bookleg' editions photocopied from reviewer proofs circulating throughout the musical and literary demi-mondes. Reissued to coincide with the paperback release of `Chronicles Volume 1', `Tarantula' will finally find the wider audience it deserves.

`Takes its place next to "On The Road "...as an essential record of an American artist's manifest destiny.' Observer

'Like discovering the lost diaries of Shakespeare... Maybe the most extraordinarily intimate autobiography by a 20th-century legend.' Daily Telegraph

'There are enough bizarre and entertaining snippets of information sprinkled throughout to fascinate the most jaded Dylan obsessive.' Independent

Born in 1941, Bob Dylan is widely revered as America's greatest living popular songwriter. Throughout of a career that has spanned over 40 years, he has acted as voice-piece and chronicler to several generations, and was one of the first to channel public feeling about racial discrimination and the Vietnam war into popular protest songs. Combining an acute awareness of the zeitgeist with absurdist humour, Dylan struck a chord with millions. In 2004, Bob Dylan published the first volume of his autobiography, Chronicles Volume 1.

GOR010378700
Tarantula by Bob Dylan
Bob Dylan
Used - Like New
Paperback
HarperCollins Publishers
2005-10-03
144
0007215045
9780007215041
N/A
Book picture is for illustrative purposes only, actual binding, cover or edition may vary.
The book has been read, but looks new. The book cover has no visible wear, and the dust jacket is included if applicable. No missing or damaged pages, no tears, possible very minimal creasing, no underlining or highlighting of text, and no writing in the margins.