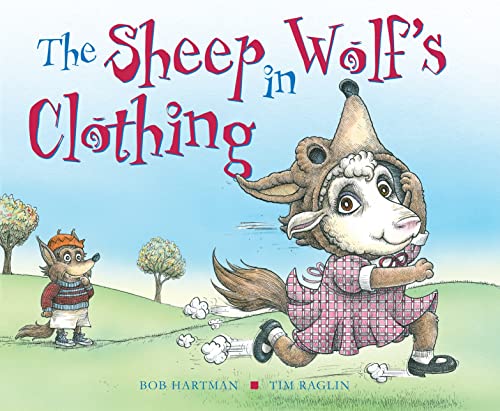 The Sheep in Wolf's Clothing
by Bob Hartman

Out of Stock
$18.49
inc. GST
A mischievous take on a classic fable by expert storyteller Bob Hartman
Very Good
Only 0 left

The Sheep in Wolf's Clothing Summary

The Sheep in Wolf's Clothing by Bob Hartman

Once upon a time there lived a family of sheep. They grazed on grass, crunched on clover, and played on green pastures. Except for Little Sheep, that is, who was bored with her peaceful life. So she makes an unusual decision... Little Sheep is having a great time at wolf school in her new knitted wolf suit and has even made friends with Little Wolf! But things all become rather more complicated when Little Wolf invites her home for dinner... A wonderfully funny pun-filled twist on a classic tale by expert storyteller Bob Hartman, and illustrated by Tim Raglin, whose humorous pictures complement the story perfectly.

The Sheep in Wolf's Clothing Reviews

The illustrations put me in mind of Maurice Sendak's Where the Wild Things Are with their cross hatching shading. Little Sheep's expressions are always a joy and there are some nice visual jokes that start on the very first page... Good fun. -- Lorraine McDonald * The Book Bag *
A superb fish-out-of-water tale with more twists and turnarounds than a twisty-turny thing! Love it, love it, LOVE IT! -- Phil May * Read It Daddy! *
Delightfully and humorously illustrated right to the end - and there's a twist at the end to enjoy -- Parents In Touch * Parents In Touch *

Bob Hartman, author of the best-selling Lion Storyteller Bible, and other titles in the Storyteller series, the highly acclaimed Angels, Angels All Around, and the hilarious Wolf Who Cried Boy. He regularly entertains children with his storytelling in schools and at festivals. Tim Raglin earned a degree from Washington University's School of Fine Arts in St Louis and immediately launched into the world of freelance illustration. Tim is also involved with a children's video production company, where he writes, illustrates and directs his own films, and has won a Grammy Award for Best Children's Recording. Tim has also won a silver medal from the New York Society of Illustrators, a Reader's Choice Award (for The Wolf Who Cried Boy) and a Parent's Choice Award (for Bill in a China Shop).

GOR007103359
The Sheep in Wolf's Clothing by Bob Hartman
Bob Hartman
Used - Very Good
Paperback
Lion Hudson Plc
2015-02-20
32
0745965008
9780745965000
N/A
Book picture is for illustrative purposes only, actual binding, cover or edition may vary.
This is a used book - there is no escaping the fact it has been read by someone else and it will show signs of wear and previous use. Overall we expect it to be in very good condition, but if you are not entirely satisfied please get in touch with us.