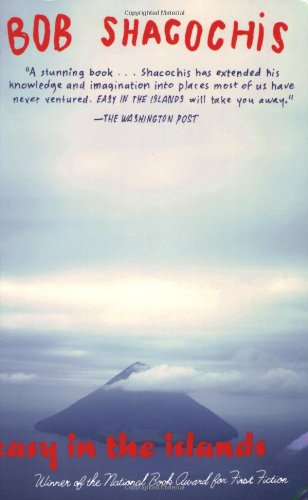 Easy in the Islands
by Bob Shacochis

Easy in the Islands Summary

Easy in the Islands by Bob Shacochis

A calypso singer named Lord Short Shoe consorts with a vampish black singer to bilk an American out of his pride and his only companion-a monkey. An entire island bureaucracy casually confounds the attempts of Tillman, a hotel owner, in his attempt to get his dead mother out of the freezer and into a real grave; stymied, he resorts to a highly unusual form of burial. Two poor islanders stumble into a high-class dance party one night and find themselves caught up in a violent encounter that just might escalate into revolution. And a young woman sails off into the romantic tropics with the man of her dreams, only to learn the hard way - as Eve did - that paradise is just another place to leave behind.

Winner of the National Book Award for first fiction, Easy in the Islands is a "stunning" (Washington Post) collection of stories by one of America's foremost contemporary fiction writers. Infused with the rhythms and the beat of the Caribbean, these vivid tales of paradise sought and paradise lost are as lush, steamy, and invigorating as the islands themselves.

From fishing fleets in remote atolls too small to appear on any map and reggae bars on islands narrow enough to walk across in an hour, to the sprawling barrios and yacht filled marinas of Miami, Bob Shacochis charts a course across a Caribbean that no one who has ever been there on vacation will recognize.

Easy in the Islands Reviews

"[Shacochis's] stories have an unselfconscious narrative momentum--a linear drive toward an ending--that I associate with the easy ways of an old master...I think this boy's been writing since he was a baby."

A contributing editor for Outside and Harper's, Bob Shacochis has been a GQ columnist and writer for numerous other national publications. He is also the author of the novel, Swimming in the Volcano, a work of literary reportage about Haiti, The Immaculate Invasion, a second collection of stories, The Next New World, and a collection of essays on food and love, Domesticity. He lives in Florida and New Mexico.

GOR005743809
Easy in the Islands by Bob Shacochis
Bob Shacochis
Used - Very Good
Paperback
Grove Press / Atlantic Monthly Press
2004-02-17
213
0802140599
9780802140593
N/A
Book picture is for illustrative purposes only, actual binding, cover or edition may vary.
This is a used book - there is no escaping the fact it has been read by someone else and it will show signs of wear and previous use. Overall we expect it to be in very good condition, but if you are not entirely satisfied please get in touch with us.