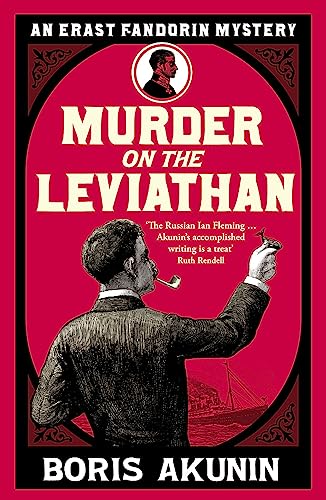 Murder on the Leviathan by Boris Akunin

'Akunin is an outstanding novelist...Fandorin is a beautifully drawn character who more than lives up to comparisons with Hercule Poirot or Sherlock Holmes...The characters are delightful and you can imagine them in a Woody Allen version of an Agatha Christie novel...Akunin's work is gloriously tongue-in-cheek but seriously edge-of-your-seat at the same time' Daily Express

On 15th March 1878 Lord Littleby, an English eccentric and collector, is found murdered in his Paris house together with nine members of his staff. A gold whale in the victim's hand leads Erast Fandorin to board the Leviathan, the world's largest steamship, as the murderer is one of the 142 first class passengers.

Commissioner Gauche of the French police has narrowed down the suspects to ten, and they are forced to eat together at every meal time in the ship's Windsor Suite until 'the Crime of the Century' is solved. But is the murderer really at the table, and can Erast Fandorin discover his or her identity before Gauche? As more passengers are murdered and the Leviathan heads towards Calcutta, Fandorin needs all his investigative skills to find the truth.

Pastiche of the highest order, absurd and completely gripping at the same time * Sunday Times *
Witty, thrilling and wholly unputdownable * Evening Standard *
Akunin is an outstanding novelist ... gloriously tongue-in-cheek but seriously edge-of-your-seat at the same time * Daily Express *
Clever and fun * The Times *

BORIS AKUNIN is the pseudonym of Grigory Chkhartishvili.
He has been compared to Gogol, Tolstoy and Arthur Conan Doyle, and his Erast Fandorin books have sold over forty million copies around the world.
He lives in London.

GOR000351381
Murder on the Leviathan: Erast Fandorin 3 by Boris Akunin
Boris Akunin
Erast Fandorin Mysteries
Used - Very Good
Paperback
Orion Publishing Co
2004-10-21
256
0753818434
9780753818435
N/A
Book picture is for illustrative purposes only, actual binding, cover or edition may vary.
This is a used book - there is no escaping the fact it has been read by someone else and it will show signs of wear and previous use. Overall we expect it to be in very good condition, but if you are not entirely satisfied please get in touch with us
Trustpilot