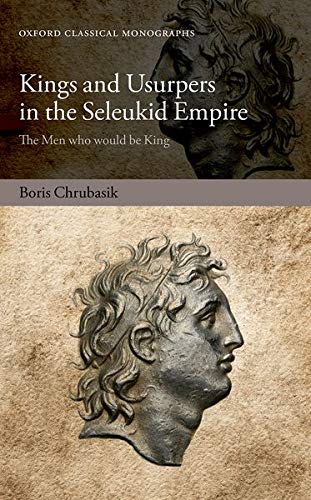 Kings and Usurpers in the Seleukid Empire
by Boris Chrubasik (Assistant Professor of Historical Studies and Classics, University of Toronto)

In Stock
$121.99
+10% GST
This volume focuses on ideas of kingship and power in the Seleukid empire, specifically the role of usurpers. Redefining the king as only one of several political players, it advances a political history predicated on social power and argues that despite its strong rulers the empire was structurally weak and the position of its kings precarious.
Very Good
Only 1 left

Kings and Usurpers in the Seleukid Empire Summary

Kings and Usurpers in the Seleukid Empire: The Men who would be King by Boris Chrubasik (Assistant Professor of Historical Studies and Classics, University of Toronto)

Kings and Usurpers in the Seleukid Empire: The Men who would be King focuses on ideas of kingship and power in the Seleukid empire, the largest of the successor states of Alexander the Great. Exploring the question of how a man becomes a king, it specifically examines the role of usurpers in this particular kingdom - those who attempted to become king, and who were labelled as rebels by ancient authors after their demise - by placing these individuals in their appropriate historical contexts through careful analysis of the literary, numismatic, and epigraphic material. By writing about kings and rebels, literary accounts make a clear statement about who had the right to rule and who did not, and the Seleukid kings actively fostered their own images of this right throughout the third and second centuries BCE. However, what emerges from the documentary evidence is a revelatory picture of a political landscape in which kings and those who would be kings were in constant competition to persuade whole cities and armies that they were the only plausible monarch, and of a right to rule that, advanced and refuted on so many sides, simply did not exist. Through careful analysis, this volume advances a new political history of the Seleukid empire that is predicated on social power, redefining the role of the king as only one of several players within the social world and offering new approaches to the interpretation of the relationship between these individuals themselves and with the empire they sought to rule. In doing so, it both questions the current consensus on the Seleukid state, arguing instead that despite its many strong rulers the empire was structurally weak, and offers a new approach to writing political history of the ancient world.

Kings and Usurpers in the Seleukid Empire Reviews

[Chrubasik]'s publication... covers welcome[d] new ground. * Kyle Erickson, University of Wales Trinity Saint David, Lampeter, Classical Review *
[Boris Chrubasik] contributes to the strong renewal of Seleucid studies; a field which has experienced unprecedented vitality over the last decade. . . . On reaching the end of this exciting book the reader will be convinced of having read an indispensable contribution to the very current debate on the nature of royal Hellenistic power. * Laurent Capdetrey, Universite Bordeaux Montaigne, Bryn Mawr Classical Review [translated from French] *
It can be concluded that Chrubasik has reached his formulated aim. With Kings and Usurpers in the Seleukid Empire, he offers not only a very readable, but also an argumentatively persuasive monograph which opens up numerous fascinating avenues for future research on Seleukid history. * Philip Egetenmeier, Tyche *
In challenging us to rethink our understanding of Seleukid kingship, Chrubasik has made a strong case. He displays a firm command of the historiographical, epigraphical, archaeological, and (especially) numismatic evidence, whose limitations he is careful to acknowledge ... For scholars of the Seleukids as well as other Hellenistic monarchies, the book is a must - read. * Jeremy LaBuff, American Journal of Philology *
Overall the book is well taken care, and almost all the bibliography is usefully put to good (which does not happen too often, lately, to some scholarship). The work of Chrubasik is therefore on par with other recent monographs on the Seleucids, contributing substantially to make a clearer framework * Federicomaria Muccioli, Sehepunkte *
Much of Chrubasik's argument is quite persuasive ... and heuristically powerful: it certainly raises questions that Seleucid historians must address. * Christopher Tuplin (University of Liverpool), Phoenix: Journal of the Classical Association of Canada *

About Boris Chrubasik (Assistant Professor of Historical Studies and Classics, University of Toronto)

Boris Chrubasik is Assistant Professor of Historical Studies and Classics at the University of Toronto. Originally from Germany, he earned his doctorate at the University of Oxford and spent a year at the University of Exeter before moving to Toronto. An ancient historian, he has a particular interest in the history of the eastern Mediterranean from the Achaemenid to the late Hellenistic periods, and has published articles on the relationship between Hellenistic cities and kings and the Attalid state. He is currently in the early steps of a new project on the relationship between ancient empires and local sanctuaries in Ancient Turkey and the Levantine coast.