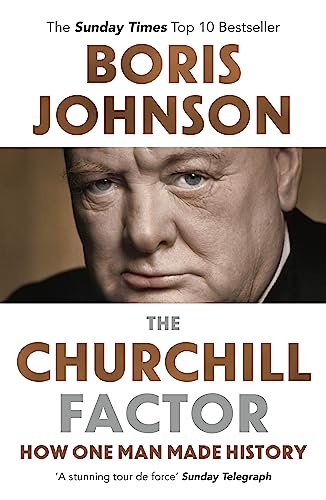 The Churchill Factor
by Boris Johnson

In Stock
$13.49
inc. GST
Written by Prime Minister Boris Johnson in 2014, The Churchill Factor is essential reading for anyone who wants to know what makes a great leader in a time of crisis.
Very Good Good Well Read
49 in stock

The Churchill Factor: How One Man Made History by Boris Johnson

As the country navigates a national crisis once again, read how Britain's Prime Minister was inspired by Winston Churchill.

One man can make all the difference.

Now leader of the UK himself, Boris Johnson explores what makes up the 'Churchill Factor' - the singular brilliance of one of the most important leaders of the twentieth century. Taking on the myths and misconceptions along with the outsized reality, he portrays - with characteristic wit and passion - a man of multiple contradictions, contagious bravery, breath-taking eloquence, matchless strategizing and deep humanity.

Fearless on the battlefield, Churchill had to be ordered by the King to stay out of action on D-Day; he embraced large-scale strategic bombing, yet hated the destruction of war and scorned politicians who had not experienced its horrors. He was a celebrated journalist, a great orator and won the Nobel Prize for Literature. He was famous for his ability to combine wining and dining with many late nights of crucial wartime decision-making. His open-mindedness made him a pioneer in healthcare, education and social welfare, though he remained incorrigibly politically incorrect.

As Prime Minister Boris Johnson says, 'Churchill is the resounding human rebuttal to all who think history is the story of vast and impersonal economic forces'.

Published in association with Churchill Heritage, The Churchill Factor is essential reading for anyone who wants to know what makes a great leader in a time of crisis.

The must-read biography of the year. * Evening Standard *
Genuinely clever... this book sizzles. * The Times *
Churchill's own energy - his indefatigable pursuit of excitement, glory, place and power - demands a writer of fizz and passion to do history justice. Johnson is that writer. * Mail on Sunday *
A bravura performance...Johnson has not only celebrated Churchill in this book: he has emulated him with comparable panache. * Financial Times *
A characteristically breathless romp through the life and times of our greatest wartime leader...high on entertainment as it is on providing an appraisal of the great man's achievements. * Telegraph *
Readable, engaging and often funny. * Evening Standard *
An engagingly written romp through the elder statesman's greatest achievements. * Observer *
Riveting...Boris is a superb, accessible writer, with an easy, good-humoured touch. * Independent *
The book's style is often chatty, enthusiastic and as funny as you would expect. * The Spectator *
Splendidly enjoyable... It is rare to find a serious study of a politician that's this entertaining. * Daily Express *

Boris Johnson is the current Prime Minister of the United Kingdom and Leader of the Conservative Party. He has represented Uxbridge and South Ruislip as a Member of Parliament since 2015. He previously served as Foreign Secretary (2016-18), and was Mayor of London (2008-16) for two terms, most notably during the London Olympics. He was also MP for Henley-on-Thames (2001-2008). Johnson was born in 1964 and has had a long and colourful career as a journalist, most recently as a columnist for The Telegraph. He was the editor of The Spectator (1999-2005).

He is the author of many books, including the international bestseller The Churchill Factor, which was published in more than twenty countries. He lives in London.

GOR006851349
The Churchill Factor: How One Man Made History by Boris Johnson
Boris Johnson
Used - Very Good
Paperback
Hodder & Stoughton
2015-07-02
432
144478305X
9781444783056
N/A
Book picture is for illustrative purposes only, actual binding, cover or edition may vary.
This is a used book - there is no escaping the fact it has been read by someone else and it will show signs of wear and previous use. Overall we expect it to be in very good condition, but if you are not entirely satisfied please get in touch with us.