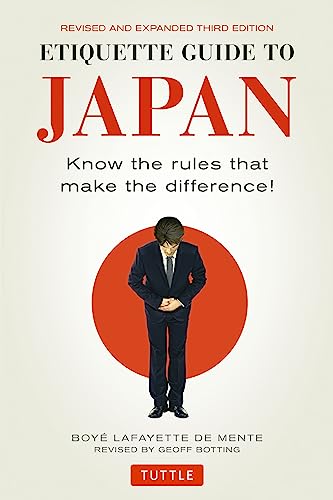 Minding your manners is an acquired skill, but what serves you well elsewhere could trip you up in Japan. Save yourself possible embarrassment with Etiquette Guide to Japan. An inside look at Japanese social graces, it answers all the questions of the thoughtful traveler. Extensive, specific information on Japanese business etiquette assists readers traveling to Japan for business.

Although often overshadowed by a modern facade, long-standing traditional aspects of Japan's culture still influence the country and almost everyone in it. Concrete evidence of this traditional culture can be seen everywhere-in the ancient arts and crafts that are still essentiasl parts of everyday life, in the many shrines and temples that dot the nation, and in the recent comeback of traditional fashions such as kimono and yakata robes.

To many Western visitors, however, the most obvious example of this traditional culture's strength is the unique etiquette of the Japanese. Like many nations, Japan has experienced vast political, social, and economic change over the past century. But enough of Japan's traditional etiquette remains to set the Japanese apart socially and psychologically and to make success in socializing and doing business with them a unique challenge for Westerners.

About this new version:
This updated and expanded edition of the best-selling Japanese etiquette guide addresses not just the puzzling protocols relating to name cards, bowing or shaking hands, bathrooms and public baths-but also what to do when entertaining Japanese dinner guests, attending a Japanese tea ceremony, taking the subway, and much more! It also provides the latest etiquette in mobile phone manners, texting, social media and other forms of digital communication.

The glossary at the back of the book has been revised to include the latest technology-related words and expressions used by Japanese today. Two new chapters address the changing role of foreigners in the workplace and the contemporary business style and etiquette used by the younger generation of Japanese who are now increasingly cosmopolitan-but still very Japanese!

"A good guide to the often complex rules of Japanese etiquette." -Book Mice blog
"Quick read with lots of interesting tidbits. Not only are rituals explored but also the ideas behind the rituals, so you learn about the behavior and the spirit of the Japanese." -Goodreads
"The material is, for the most part, very well-written and researched, which is not surprising given the extensive experience of both the author and the editor. [...] Their writing exemplifies a certain type of professionalism which is absent in many informal blogs on Japanese culture." -Self Taught Japanese blog
"The chapters in this book are nice and compact and often preceded by a black-and-white page-wide photograph of the topic discussed. This makes the book easy to read, also because the clear writing style of the book makes it easy to digest the often complex etiquette of the country." -The Travel Tester blog
"An absolutely essential read for anyone who wants to learn more about Japan's culture...I give this book five enthusiastic stars!" -Nix the Norm blog
"Etiquette in Japan is very important. When should you bow and how deep should it be? This guide will help avoid social blunders, providing helpful advice on proper behavior in a variety of situations, such as on public transportation and in restaurants, temples, and more." -Library Journal
"If you'll be visiting Tokyo for the 2020 Olympics, this guide to Japan makes a good travel companion, ensuring you're up to date on polite behavior and customs. It's not enough just to know the language; an etiquette guide helps make sure you aren't accidentally using rude gestures, impolite slang, or insults." -Trips to Discover

Boye Lafayette De Mente has been involved with Japan, China, and Korea since the late 1940s as a member of a U.S. intelligence agency, student, trade journalist, editor, and author working out of Tokyo, Seoul, Hong Kong, and Singapore. He is a graduate of Jochi University in Tokyo and The American Institute for Foreign Trade (now Thunderbird: The School of Global Management, in Glendale, Arizona). His 70-plus books include Japan's Cultural Code Words, Business Guide to Japan, and Japan Unmasked.

Geoff Botting has lived in Japan for more than a quarter-century, long enough to witness Japan's economic bubble, its bursting and the changes that came in its wake. He is a freelance translator and print and broadcast journalist, specializing in business issues. He has a degree in economics from the University of Victoria in Canada and a diploma from Kai Japanese Language School in Tokyo.

GOR008230067
Etiquette Guide to Japan: Know the Rules that Make the Difference! (Third Edition) by Boye Lafayette De Mente
Boye Lafayette De Mente
Used - Very Good
Paperback
Tuttle Publishing
2015-09-15
192
4805313617
9784805313619
N/A
Book picture is for illustrative purposes only, actual binding, cover or edition may vary.
This is a used book - there is no escaping the fact it has been read by someone else and it will show signs of wear and previous use. Overall we expect it to be in very good condition, but if you are not entirely satisfied please get in touch with us.