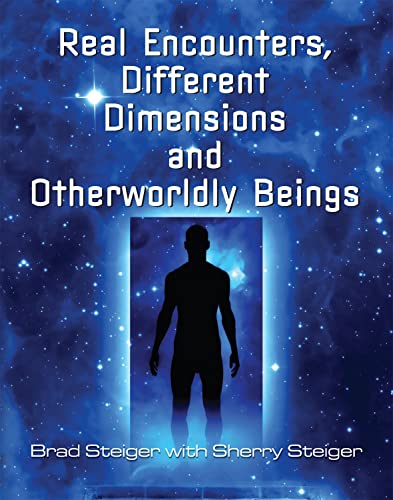 From mysterious strangers and unpredictable beings to weird behaviour and paranormal phenomena, the investigative team of Brad and Sherry Steiger explores more than 130 claims of visits from the unexplained, including ghosts, phantoms, aliens and otherworldly beings. The book covers accounts of the supernatural from throughout the ages, and the breadth of the duo's findings and encounters will have even nonbelievers intrigued to discover what bold claim is next.
The Steigers add another terrific volume to their extensive list of paranormal books. ... Open to any page in this book and you'll find something fascinating or terrifying. It belongs on your bookshelf. About.com

If you would like a much deeper and richer introduction into this twilight realm between the known worlds of establishment science and religion, the Steiger's have certainly prepared an excellent assemblage of thought-provoking material for all of us to ponder and reflect upon much further. ... another comprehensive, thought-provoking masterpiece Alternate Perceptions

I am completely amazed on how many people love UFO lore, but are so misguided with the facts. I am so glad that there are researchers out there like Sherry and Brad ... This book transcends ignorance and misinformation ... Another standing ovation for the Steigers! Beforeitsnews.com

These two veteran researchers of a wide variety of paranormal experiences once more produce an encyclopaedic volume, this time thematically on anomalous experiences of other 'worlds' and 'entities', from the expected aliens and fairies to demons, totem animals, angels, spirits, poltergeists, disembodied voices and the sense of divine presence. A good fortean read. Fortean Times

This is a book that skillfully demonstrates the world we see around us does not amount to all that there is to see. There are domains and dimensions that are inhabited by supernatural intelligences that we do not fully understand, and forces and forms to be reckoned with. Real Encounters, Different Dimensions, and Otherworldly Beings opens those doors and unleashes those forces and forms upon us and then some! Mysterious Universe .org

Real Encounters covers a lot of ground. If it falls under the labels of UFOs, Weird History, the Supernatural, Spiritualism, Conspiracy, you'll find it here. It's a no holds barred look at the unexplainable with people who do a good job of explaining it. This is one of the rare books that has something to offer both the reader new to the topic as well as a life long follower. Definitely worth a read, and this may be the book everyone wants to borrow. You have been warned. HorrorTalk.com

Brad Steiger (Author) : For five decades, award-winning writer Brad Steiger has been devoted to exploring and examining unusual, hidden, secret, and otherwise strange occurrences. He has written over 2,000 articles and more than 150 titles with inspirational and paranormal theme, including Real Ghosts, Restless Spirits, and Haunted Houses, Real Monsters, Gruesome Critters, and Beasts from the Darkside, Real Vampires, Night Stalkers, and Creatures from the Darkside, Real Zombies, the Living Dead, and Creatures of the Apocalypse, The Werewolf Book, and Conspiracies and Secret Societies. Brad is a veteran of broadcast news magazines ranging from Nightline to the NBC Nightly News. He is also a regular radio guest on Jeff Rense's Sightings, The Allan Handelman Show, Rob McConnell's X-Zone, and Coast to Coast with George Noory and Art Bell. Sherry Steiger (Author) : Sherry Hansen Steiger is an expert on health and healing, spirituality, and the unexplained. She has authored or coauthored more than forty books, including the inspirational and best-selling Miracles series, including Dog Miracles, Animal Miracles, Miracles of a Mother's Love, and Christmas Miracles (winner of the 2002 Storytelling Award from Storytelling World magazine). An ordained minister, Sherry has served as counselor to troubled youth, the homeless, migrant workers, and families in need of crisis intervention. With her background in nursing and theology, Sherry began researching alternative health issues and mysterious of the unknown in the 1960s; she cofounded the Celebrate Life workshop; and she formed the Butterfly Center for Transformation, a nonprofit holistic research and education school.
GOR006383150
9781578594559
1578594553
Real Encounters, Different Dimensions And Otherwordly Beings by Brad Steiger
Brad Steiger
Used - Very Good
Paperback
Visible Ink Press
20131017
384
N/A
Book picture is for illustrative purposes only, actual binding, cover or edition may vary.
This is a used book - there is no escaping the fact it has been read by someone else and it will show signs of wear and previous use. Overall we expect it to be in very good condition, but if you are not entirely satisfied please get in touch with us
Trustpilot