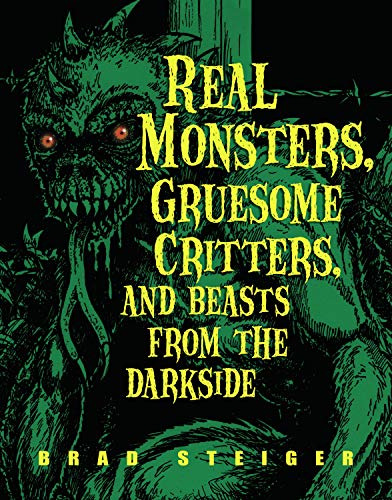 Real Monsters, Gruesome Critters And Beasts From The Dark Side by Brad Steiger

Real Monsters, Gruesome Critters And Beasts From The Dark Side by Brad Steiger

Over 250 of the most bloodcurdling and bone-chillingly fascinating and true monster stories. Not recommended for reading just before bedtime!

Monsters have been spotted everywhere, not just slithering under a child's bed or lurking in the closet. Paranormal researcher extraordinaire Brad Steiger, an author of thousands of books and articles on the mysterious and unknown, collects some of the scariest, most unbelievable but true monster stories in his latest collection, Real Monsters, Gruesome Critters and Beasts from the Darkside.

From slightly demented humans to spine-tingling paranormal encounters, each outlandish occurrence is detailed with thorough research and recounted with a storyteller's crafted voice. This bold telling of verified monster sightings taken from historical records and first-person accounts features:

I don't think a list of best paranormal books for any year would be complete with a few titles from Brad Steiger. His work is always thorough, knowledgeable and engaging, and this book is no exception. It's a virtual encyclopedia of strange creatures. This is a must for every paranormal enthusiast's bookshelf. About.com

Another creepy classic of encyclopedic proportions .... Brad's book will have you riveted to each page from beginning to end. Alternate Perceptions

Highly entertaining and a great book for anyone interested in the weird and the frightening. Fate Magazine

One of Steiger's best books yet, Real Monsters is full of the kind of stories that we have come to expect from him the kind you have to leave the light on just to get half-way through! Hauntedamericatours.com

Steiger's passion for his subject matter is evident throughout the book, which makes for a pleasurable tour through the shadow-filled underworld that so many of his beloved creatures inhabit. In addition to being a fun, well-written book, Steiger's volume [has] literally hundreds of unique monsters and beasts just waiting to be discovered. Horrornews.net

Steiger's writing is crisp, and the topics are captivating. This work is an entertaining read on intriguing and sometimes bizarre subject matter at a very affordable cost. Library Journal

If you're new to the subject of unknown animals and are wondering what all the fuss is about, then Real Monsters, Gruesome Critters, and Beasts from the Darkside is a great place to begin your journey of adventure. If you're a seasoned and long-term devotee of the world of strange creatures, then you'll appreciate the care, time and fine writing that has gone into this latest publication from one of the world's leading experts on the paranormal. Mania.com

Does someone you know love to be scared? You won't find many things scarier than Real Monsters, Gruesome Critters, and Beasts from the Darkside ... This comprehensive book by the Master of Monsters is filled with short, readable paragraphs about all sorts of things that go bump in the night. Be sure to wrap it up with a flashlight, for obvious reasons... The Bookworm Sez
For five decades, award-winning writer Brad Steiger was devoted to exploring and examining unusual, hidden, secret, and otherwise strange occurrences. He wrote over 2,000 articles and more than 180 titles, with over 17 million copies in print. His titles include Real Ghosts, Restless Spirits, and Haunted Houses; Real Encounters, Different Dimensions and Otherworldy Beings; Real Aliens, Space Beings, and Creatures from Other Worlds; Real Visitors, Voices from Beyond, and Parallel Dimensions; Real Monsters, Gruesome Critters, and Beasts from the Darkside; The Werewolf Book; and Conspiracies and Secret Societies. Steiger was a former high school and college teacher and a veteran of broadcast news magazines. From 1970-73, his weekly newspaper column, The Strange World of Brad Steiger, was carried domestically in over 80 newspapers and overseas from Bombay to Tokyo. He was born in Fort Dodge, Iowa, on February 19, 1936. Steiger was married to Sherry Hansen Steiger. He died on May 6, 2018.
NPB9781578592203
9781578592203
1578592208
Real Monsters, Gruesome Critters And Beasts From The Dark Side by Brad Steiger
Brad Steiger
New
Paperback
Visible Ink Press
20100916
404
N/A
Book picture is for illustrative purposes only, actual binding, cover or edition may vary.
This is a new book - be the first to read this copy. With untouched pages and a perfect binding, your brand new copy is ready to be opened for the first time
Trustpilot