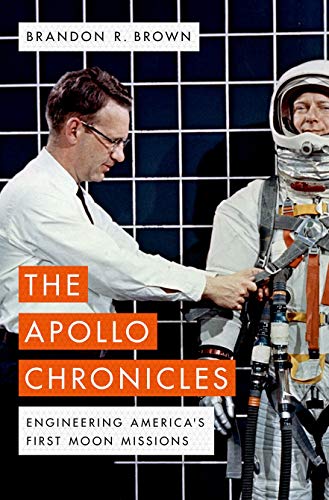 The moon landing of 1969 stands as an iconic moment for both the United States and humankind. The familiar story focuses on the journey of the brave astronauts, who brought home Moon rocks and startling photographs. But Apollo's full account includes the earthbound engineers, mounds of their crumpled paper, and smoldering metal shards of exploded engines. How exactly did the nation, step by difficult step, take men to the Moon and back? In The Apollo Chronicles, fifty years after the moon landing, author Brandon R. Brown, himself the son of an Apollo engineer, revisits the men and women who toiled behind the lights. He relays the defining twentieth-century project from its roots, bringing the engineers' work and personalities to bright life on the page. Set against the backdrop of a turbulent American decade, the narrative whisks audiences through tense deadlines and technical miracles, from President John F. Kennedy's 1961 challenge to NASA's 1969 lunar triumph, as engineers confronted wave after wave of previously unthinkable challenges. Brown immerses readers in key physical hurdles-from building the world's most powerful rockets to keeping humans alive in the hostile void of space-using language free of acronyms and technical jargon. The book also pulls back from the detailed tasks and asks larger questions. What did we learn about the Moon? And what can this uniquely innovative project teach us today?

An excellent history of the space program through the eyes of its engineers and scientists. * James Gleick, The New York Review of Books *
Brown takes us leap by leap through the 1960s, tracing the parallel engineering work at Cape Canaveral (the launch site in Florida), the Manned Spacecraft Center in Houston, Texas (now the Johnson Space Center), and the rocketry group in Huntsville, Alabama. Brown peppers his account with on-the-ground details of how engineers dealt with unexpected problems. * Alexandra Witze, Nature *
Brown shows the engineers meeting tough deadlines and performing technical miracles, drawing schematics around the clock, making mistakes, coping with warning lights that blinked at the worst possible time, and regrouping after the tragic death of three astronauts. * Flora Taylor, American Scientist *
A great addition to anything you may have read about the space race with so much material I've never seen before * Brian Clegg, Popular Science *
While [Brown] appreciates the bravery of the astronauts, his book is "more concerned with the astronauts' protectors" (which is a nice way of looking at it). This book... is written in an entertaining and accessible narrative style. It concludes with a thought-provoking observation on the heritage of the Apollo engineers. * Mark Williamson, Engineering & Technology *
In The Apollo Chronicles, we meet the engineers who toiled behind the spotlights from 1958 to 1972. The son of an Apollo engineer, author Brandon R. Brown devotes his writing chops to storytelling and a dramatic tension that will engage even the most technical unsavvy and engineering estranged of readers. * Nelson Noven, Fahrenheit *

Brandon R. Brown is a Professor of Physics at the University of San Francisco. His research includes work on superconductivity and sensory biophysics. He enjoys writing about science for general audiences, including articles and essays in New Scientist, SEED, and the Huffington Post, as well as a biography, Planck, that won the 2016 Housatonic Award for Nonfiction.