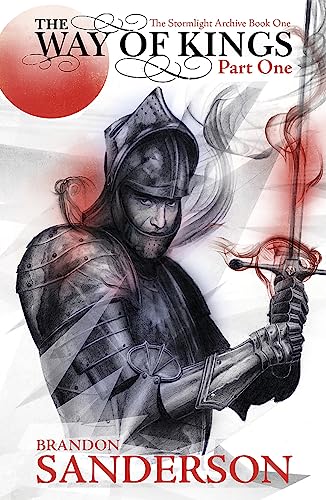 The Way of Kings Part One
by Brandon Sanderson

In Stock
$211.99
inc. GST
The brand new epic fantasy series from international bestseller Brandon Sanderson. Released in two volumes due to size of book.
Like New Very Good
Only 1 left

The Way of Kings Part One Summary

The Way of Kings Part One: The Stormlight Archive Book One by Brandon Sanderson

According to mythology mankind used to live in The Tranquiline Halls. Heaven. But then the Voidbringers assaulted and captured heaven, casting out God and men. Men took root on Roshar, the world of storms. And the Voidbringers followed ...

Or so the legends say. Today, the only remnants of those supposed battles are the Shardblades, the possession of which makes a man nearly invincible on the battlefield. The entire world is at war with itself - and has been for centuries since the Radiants turned against mankind. Kings strive to win more Shardblades, each secretly wishing to be the one who will finally unite all of mankind under a single throne.

On a world scoured down to the rock by terrifying hurricanes that blow through every few days is a young spearman, forced into the army of a Shardbearer, led to war against an enemy he doesn't understand and doesn't really want to fight.

What happened deep in mankind's past?

Why did the Radiants turn against mankind, and what happened to the magic they used to wield?

The Way of Kings Part One Reviews

The Way of Kings Part 1 manages to grip you from the very first page and doesn't let go, it's a powerful and somewhat mesmerising start to a very promising series and one which I intend to follow very closely indeed. * SFBOOK.COM *

Brandon Sanderson was born in Nebraska in 1975. Since then he has written, amongst others The Mistborn books and begun the internationally bestselling Stormlight Archive. He was also chosen by Robert Jordan's family to complete Jordan's Wheel of Time Sequence. He lives in Utah.

GOR007954400
The Way of Kings Part One: The Stormlight Archive Book One by Brandon Sanderson
Brandon Sanderson
Stormlight Archive
Used - Like New
Paperback
Orion Publishing Co
2011-05-26
608
0575097361
9780575097360
N/A
Book picture is for illustrative purposes only, actual binding, cover or edition may vary.
The book has been read, but looks new. The book cover has no visible wear, and the dust jacket is included if applicable. No missing or damaged pages, no tears, possible very minimal creasing, no underlining or highlighting of text, and no writing in the margins.