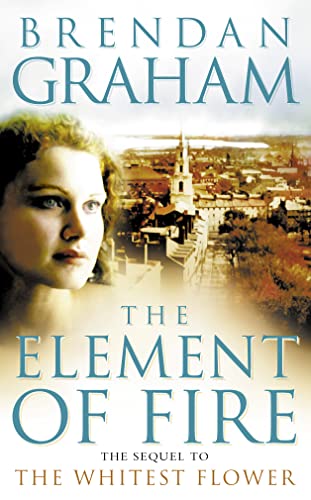 The Element of Fire
by Brendan Graham

The Element of Fire Summary

The Element of Fire by Brendan Graham

Boston in the 1850s is the hub of the universe: gateway to America's temples of commerce and learning; liberal, sophisticated - the very best place in all of the New World for a woman to be. There, awaiting Ellen, are the stability of a new life and Lavelle, the man who loves her.

But Ellen, desperate to shake off the Old World, is driven by her own demons to put everything at risk. And Boston, on the brink of Civil War, seems only to mirror her own conflict, to sound the knell of her own battle for survival.

A powerful and compelling tale of lives and loves dislocated, The Element of Fire captures emotions as timeless as life. And love.

The Element of Fire Reviews

Reviews for The Whitest Flower:

`Irish history is like a gold seam for historical novelists. Occasionally a nugget is produced and Graham's is one of those.' Ireland on Sunday

`This huge sweep of a novel will whisk you from Ireland to Australia and Canada.' Woman's Realm

Born in County Tipperary in 1945, Brendan Graham's debut novel `The Whitest Flower' (Nov 1998), became a No.2 Bestseller in Ireland as well as attracting widespread international acclaim. Translated into a number of languages it is also a required text at Boston's Massachusetts Institute of Technology for the course `Women, Storytelling and Performance'.

GOR000675786
The Element of Fire by Brendan Graham
Brendan Graham
Used - Very Good
Paperback
HarperCollins Publishers
2002-02-27
464
0006513964
9780006513964
N/A
Book picture is for illustrative purposes only, actual binding, cover or edition may vary.
This is a used book - there is no escaping the fact it has been read by someone else and it will show signs of wear and previous use. Overall we expect it to be in very good condition, but if you are not entirely satisfied please get in touch with us.