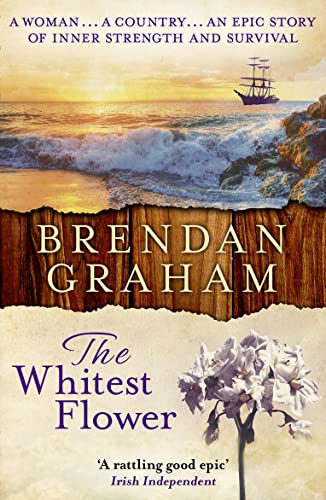 The Whitest Flower
by Brendan Graham

The Whitest Flower by Brendan Graham

It is August 1845. In Dublin's Botanic Gardens, Phytophora infestans is discovered for the first time. The bacteria blooms throughout the country, blighting potato crops and creating what becomes known as the Great Famine: an event of holocaust proportions that affects every man, woman and child in Ireland.

Ellen O'Malley is one such victim. As the Blight ravages the land, Ellen loses her husband. Alone and vulnerable, she is duped into going to Australia to seek a better life, leaving three of her beloved children behind. Travelling aboard a coffin ship, she arrives emaciated and ill with her new baby. But the country proves a harsh and brutal landscape and a change in fortunes seems further away than ever. But Ellen, a woman with an indomitable spirit, is determined to rise above her oppression and bring her family together once more.

`Irish history is like a gold seam for historical novelists - there to be mined. Occasionally a nugget is produced and Graham's is one of those.'
Ireland on Sunday

`Posted for worldwide literary success. A gripping page-turner about one of the grossest stains on the British Empire.'
Hotpress

`A remarkable and emotional odyssey which uses the great Irish famine and the subsequent diaspora as the subject matter for a novel of immense potency.'
Irish Post

`This huge sweep of a novel will whisk you from Ireland to Australia and Canada.'
Woman's Realm

Born in County Tipperary in 1945, Brendan Graham's debut novel `The Whitest Flower' (Nov 1998), became a No.2 Bestseller in Ireland as well as attracting widespread international acclaim. Translated into a number of languages it is also a required text at Boston's Massachusetts Institute of Technology for the course `Women, Storytelling and Performance'

GOR001292599
The Whitest Flower by Brendan Graham
Brendan Graham
Used - Very Good
Paperback
HarperCollins Publishers
1999-01-26
640
0006510507
9780006510505
N/A
Book picture is for illustrative purposes only, actual binding, cover or edition may vary.
This is a used book - there is no escaping the fact it has been read by someone else and it will show signs of wear and previous use. Overall we expect it to be in very good condition, but if you are not entirely satisfied please get in touch with us.