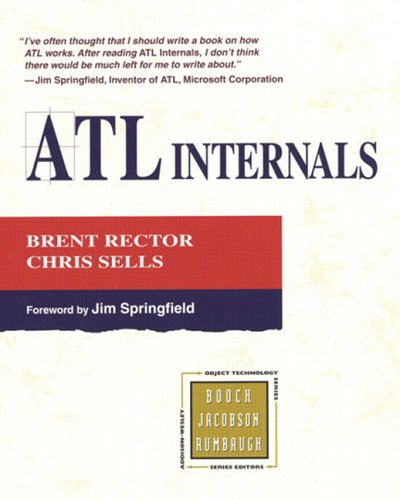 In Stock
$45,99
inc. GST
The Active Template Library (ATL) is a set of small, efficient, and flexible classes that facilitate the creation of interoperable COM components. This book provides: in-depth coverage of ATL's inner workings, insight into the rationale behind ATL design, explanation of its architectural underpinnings, and more.
Very Good Good
Only 3 left

"This book is the definitive reference for ATL programmers. The chapter on CComObject is worth the price alone."--Don Box, COM guy, DevelopMentor"Brent and Chris are always technically accurate and present the information in a well written, easy to understand manner...I bought it and I'm the ATL Development Lead!"--Christian Beaumont, ATL Development Lead, Microsoft Corporation The Active Template Library (ATL) is a set of small, efficient, and flexible classes that facilitate the creation of interoperable COM components. Written for experienced COM and Visual C++ programmers, this book provides in-depth coverage of ATL's inner workings. It offers insight into the rationale behind ATL design, explains its architectural underpinnings, shows how ATL maps to COM, and describes important implementation details. With coverage current through ATL version 3.0, ATL Internals includes an overview of the Wizards but then goes well beyond the basics. The authors provide the detailed information needed to utilize ATL to its greatest advantage and work around its shortcomings.You will find detailed coverage of such topics as: *ATL Smart Types, such as CComPtr, CComVariant, and CComBSTR *Objects in ATL, covering COM object responsibilities and ATL threading model support *Servers in ATL, including ATL's class object implementations, managing server lifetime, self-registration, and server build optimizations *Interface maps, focusing on the techniques C++ programmers can use to implement COM interfaces and how ATL supports these techniques *Persistence and connection points *Enumeration, covering both pre-calculated and dynamic data sets, and enumerating over an STL container *ATL windowing classes *Controls and Control Containment If you want to optimize ATL by learning effective techniques that reduce the time you spend writing boilerplate COM code, there is no better resource than this book. 0201695898B04062001

"I've often thought that I should write a book on how ATL works. After reading ATL Internals, I don't think there would be much left for me to write about." - Jim Springfield, Inventor of ATL, Microsoft Corporation

"This book is the definitive reference for ATL programmers. The chapter on CcomObject is worth the price alone." - Don Box, COM guy, DevelopMentor

Brent E. Rector is President of Wise Owl Consulting, Inc., a firm that specializes in Windows/COM development and consulting. He also teaches classes on COM, ATL, and MTS for DevelopMentor, a leading COM education firm. He received the Microsoft Annual MVP (Most Valuable Professional) award for his contributions to CompuServe's Windows forums.

Appendix B: ATL Classes and Headers.

GOR001207282
ATL Internals by Brent E. Rector
Brent E. Rector
Used - Very Good
Paperback
Pearson Education (US)
1999-03-31
656
0201695898
9780201695892
N/A
Book picture is for illustrative purposes only, actual binding, cover or edition may vary.
This is a used book - there is no escaping the fact it has been read by someone else and it will show signs of wear and previous use. Overall we expect it to be in very good condition, but if you are not entirely satisfied please get in touch with us.