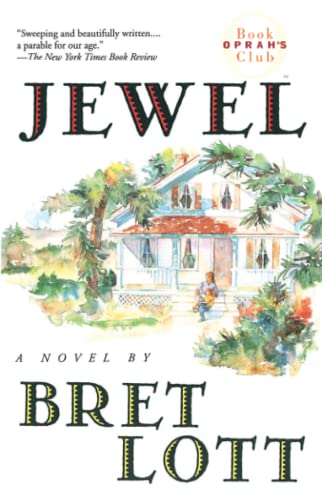 In Stock
$9.99
+10% GST
In the backwoods of Mississippi, Jewel and her husband Leston are blessed with five healthy children. All this changes with the birth of Brenda Kay in 1943. This is the story of a woman's devotion to a child who is both her burden and her blessing.
Very Good
Only 2 left

In the backwoods of Mississippi, a land of honeysuckle and grapevine, Jewel and her husband, Leston, are truly blessed; they have five fine children. When Brenda Kay is born in 1943, Jewel gives thanks for a healthy baby, last-born and most welcome. "Jewel" is the story of how quickly a life can change; how, like lightning, an unforeseen event can set us on a course without reason or compass. In this story of a woman's devotion to the child who is both her burden and God's singular way of smiling on her, Bret Lott has created a mother-daughter relationship of matchless intensity and beauty, and one of the finest, most indomitable heroines in contemporary American fiction.

The New York Times Book Review Sweeping and beautifully written....a parable for our age.
The Chicago Tribune Bret Lott's Jewel is a beautifully crafted first-person epic of one poor southern woman's personal duel with God....This is a voice we don't want to stop hearing....Some of the tenderest scenes of family love since those in Dickens....
The Los Angeles Times Lott is one of the most important and imaginative writers in America today. His eye for detail is unparalleled; his vision -- where he looks -- is like no one else's in this country.
The Boston Globe Bret Lott has a gift for making the ordinary seem luminous. In Jewel, he applies his art to a broad canvas and produces what may stand as his masterpiece....Lott matches the honest strength of his characters with that of his prose. His Jewel is a force of nature, her story rising out of a perfect, seamless union of teller and tale.

Bret Lott is a native of Los Angeles, California. His parents were raised in Mississippi and East Texas and relocated to Los Angeles in the 1950s. It is this Southern heritage -- going all the way back to the War Between the States -- that Mr. Lott has drawn on in writing Jewel. He is the author of five highly acclaimed novels, The Man Who Owned Vermont, A Stranger's House, Jewel, Reed's Beach, and The Hunt Club, as well as two collections of widely anthologized short stories, A Dream of Old Leaves and How to Get Home, and a memoir, Fathers, Sons, and Brothers. He lives with his wife and two sons near Charleston, South Carolina, and teaches at the College of Charleston and Vermont College.

GOR002824089
Jewel by Bret Lott
Bret Lott
Used - Very Good
Paperback
Simon & Schuster
1999-04-28
368
0671038184
9780671038182
N/A
Book picture is for illustrative purposes only, actual binding, cover or edition may vary.
This is a used book - there is no escaping the fact it has been read by someone else and it will show signs of wear and previous use. Overall we expect it to be in very good condition, but if you are not entirely satisfied please get in touch with us.