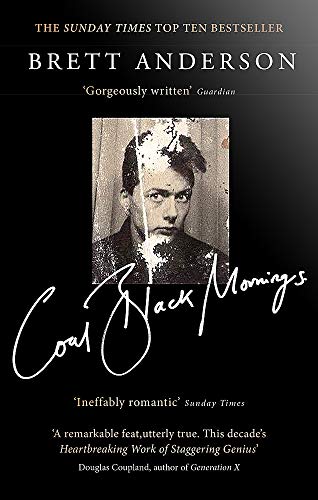 Brett Anderson came from a world impossibly distant from rock star success, and in Coal Black Mornings he traces the journey that took him from a childhood as 'a snotty, sniffy, slightly maudlin sort of boy raised on Salad Cream and milky tea and cheap meat' to becoming founder and lead singer of Suede.

Anderson grew up in Hayward's Heath on the grubby fringes of the Home Counties. As a teenager he clashed with his eccentric taxi-driving father (who would parade around their council house dressed as Lawrence of Arabia, air-conducting his favourite composers) and adored his beautiful, artistic mother. He brilliantly evokes the seventies, the suffocating discomfort of a very English kind of poverty and the burning need for escape that it breeds. Anderson charts the shabby romance of creativity as he travelled the tube in search of inspiration, fuelled by Marmite and nicotine, and Suede's rise from rehearsals in bedrooms, squats and pubs. And he catalogues the intense relationships that make and break bands as well as the devastating loss of his mother.

Coal Black Mornings is profoundly moving, funny and intense - a book which stands alongside the most emotionally truthful of personal stories.

A remarkable feat, utterly true. This decade's Heartbreaking Work of Staggering Genius -- Douglas Coupland, author of Generation X and Girlfriend in a Coma
Coal Black Mornings is a triumph . . . a bracingly honest work raised way above the celeb book fray by Anderson's obvious talent for writing . . . revelatory and delivered with writerly panache -- John Harris * Mojo *
Fascinating . . . gorgeously written. On more than one occasion it made we well up . . . most certainly not just for the fan club * Guardian *
A rich, sad and honest tale -- Olivia Cole * GQ *
Beautifully crafted and brilliantly well-written . . . his memoir is a thought-provoking meditation on how our childhoods form the people we become, as well as a love letter to London . . . The book is perfect as it is, but there's no question that we need a second volume -- Anna van Praagh * Evening Standard *
Coal Black Mornings is excellent: evocative, thoughtful and frank; an instant hit in a minor key. Anderson is particularly good on his unusual upbringing . . . as accomplished a writer of elegant prose as he was of narcotically enhanced lyrics about urban ennui -- Neil Armstrong * Mail on Sunday *
a thrillingly energetic, bracingly entertaining snapshot of a writer hitting his first full flush, leaving you wishing two things. One: that you'd formed a band. Two: that he changes his mind about documenting the coke-blurred mornings to come * Record Collector *
An ineffably romantic coming-of-age story; a beautiful reminder of the magic that happens round the edges * Sunday Times *
Generous, funny, poignant * Financial Times *
Perfect prose, thanks to which Coal Black Mornings does the job of describing the beauty in the banality better than any music memoir since Patti Smith's sublime Just Kids * Classic Pop *
His memoir is melancholy and evocative, a dreamy ballad recalling the time before the drugs and the band break-up * Sunday Express *
Personal and moving, unpolished and demure . . . Coal Black Mornings is a bravura performance * Times Literary Supplement *
Revealing, funny and moving * Mail on Sunday *
As an antidote to all the drug-fuelled destruction, I recommend Brett Anderson's elegant Coal Black Mornings, in which the Suede frontman looks back on his pre-fame days * Telegraph *
Few rock memoirs are worthy of critical note. Brett Anderson's richly melancholic Coal Black Mornings was an exception. Eschewing the "coke and gold discs" template, the Suede singer recounts a childhood of bohemian poverty and traces his band's vivid prehistory -- George Eaton * New Statesman *
It shouldn't have come as a surprise that one of British pop's most original lyricists would write a book almost poetic in its language and painterly in its eye for detail, but this illuminating, moving and generous memoir by the Suede frontman still had the power to confound . . . Coal Black Mornings is a thing of beauty and a work of art * Sunday Times *
Richer and stranger than any tale of narcotic excess and success * Guardian *
a tough-minded and emotionally acute account of the Suede singer's childhood and teenage years, about his relationship with his parents and the route map that pop music provided for him to march away from his suburban origins * Herald *
2018 Music Book of the Year: A brilliant account of how growing up can be impossible and full of possibility, all at the same time -- Victoria Segal * Q *

Brett Anderson is the founder and lead singer of Suede.

GOR010144311
Coal Black Mornings by Brett Anderson
Brett Anderson
Used - Like New
Paperback
Little, Brown Book Group
2018-12-20
224
140871048X
9781408710487
Long-listed for Penderyn Music Book Prize 2018 (UK)
Book picture is for illustrative purposes only, actual binding, cover or edition may vary.
This is a used book - there is no escaping the fact it has been read by someone else and it will show signs of wear and previous use. Overall we expect it to be in very good condition, but if you are not entirely satisfied please get in touch with us.