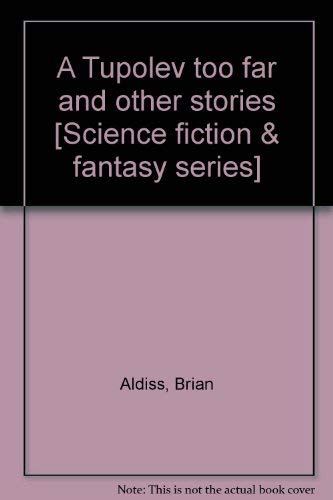 A Tupolev Too Far
by Brian Aldiss

A Tupolev Too Far Summary

A Tupolev Too Far Reviews

`Once again he demonstrates the power of his imagination.' Daily Mail

`It's a terrific yarn, but more than that; as Aldiss casually throws out ideas and speculations, it's a reminder of why he's one of the giants of the field.' SFX Magazine

`One of our best novelists.' William Boyd

`Brian Aldiss is one of those writers who can stand back and look out across the vast fictional landscape of sciences fiction, and consider himself both a creator and a destroyer of worlds; a mortal God if you will.' Starburst Magazine

'For decades, Brian Aldiss has been among our most prolific and consistently stylish writers.' Telegraph

`Frightening, gripping... not one for the squeamish' Illustrated London News

Brian Aldiss, OBE, was a fiction and science fiction writer, poet, playwright, critic, memoirist and artist. Born in Norfolk in 1925, after leaving the army, Aldiss worked as a bookseller, which provided the setting for his first book, The Brightfount Diaries (1955). His first published science fiction work was the story `Criminal Record', which appeared in Science Fantasy in 1954. Passing away in 2017, over the course of his life Aldiss wrote nearly 100 books and over 300 short stories - becoming one of the pre-eminent science fiction writers of the 20th and 21st century.

GOR004505581
A Tupolev Too Far (The Brian Aldiss Collection) by Brian Aldiss
Brian Aldiss
The Brian Aldiss Collection
Used - Very Good
Paperback
HarperCollins Publishers
1994-10-24
208
0006476317
9780006476313
N/A
Book picture is for illustrative purposes only, actual binding, cover or edition may vary.
This is a used book - there is no escaping the fact it has been read by someone else and it will show signs of wear and previous use. Overall we expect it to be in very good condition, but if you are not entirely satisfied please get in touch with us.