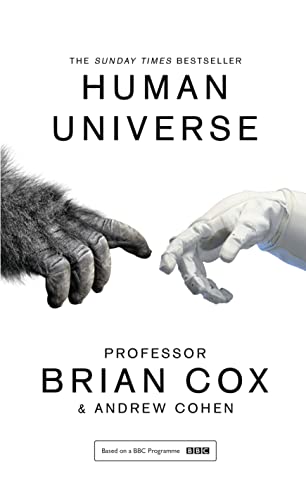 Where are we? Are we alone? Who are we? Why are we here? What is our future?

Where are we? Are we alone? Who are we? Why are we here? What is our future?

Human Universe tackles some of the greatest questions that humans have asked to try and understand the very nature of ourselves and the Universe in which we live.

Through the endless leaps of human minds, it explores the extraordinary depth of our knowledge today and where our curiosity may lead us in the future. With groundbreaking insight it reveals how time, physics and chemistry came together to create a creature that can wonder at its own existence, blessed with an unquenchable thirst to discover not just where it came from, but how it can think, where it is going and if it is alone.

`Cox's romantic, lyrical approach to astrophysics all adds up to an experience that feels less like homework and more like having a story told to you. A really good story, too.' Guardian

`He bridges the gap between our childish sense of wonder and a rather more professional grasp of the scale of things.' Independent

`If you didn't utter a wow watching the TV, you will while reading the book.' The Times

`In this book of the acclaimed BBC2 TV series, Professor Cox shows us the cosmos as we have never seen it before - a place full of the most bizarre and powerful natural phenomena.' Sunday Express

`Will entertain and delight ... what a priceless gift that would be.' Independent on Sunday

Professor Brian Cox, OBE is a particle physicist, a Royal Society research fellow, and a professor at the University of Manchester as well as researcher on one of the most ambitious experiments on Earth, the ATLAS experiment on the Large Hadron Collider in Switzerland. He is best known to the public as a science broadcaster and presenter of the popular BBC Wonders trilogy.

Andrew Cohen is Head of the BBC Science Unit and the Executive Producer of the BBC series Human Universe. He has been responsible for a wide range of science documentaries including Horizon, the Wonders trilogy and Stargazing Live. He is an honorary lecturer in Life Sciences at the University of Manchester and lives in London with his wife and three children.

GOR006655472
Human Universe by Brian Cox
Brian Cox
Used - Very Good
Paperback
HarperCollins Publishers
2015-05-07
272
0008125082
9780008125080
N/A
Book picture is for illustrative purposes only, actual binding, cover or edition may vary.
This is a used book - there is no escaping the fact it has been read by someone else and it will show signs of wear and previous use. Overall we expect it to be in very good condition, but if you are not entirely satisfied please get in touch with us.