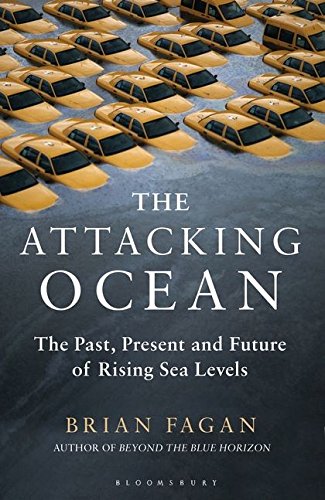 The Attacking Ocean
by Brian Fagan

The Attacking Ocean: The Past, Present, and Future of Rising Sea Levels by Brian Fagan

Over the past fifteen thousand years the Earth has witnessed dramatic changes in sea level. The last Ice Age, when coastlines were more than 700 feet below modern levels, saw rapid global warming, and over the following ten millennia, the oceans climbed in fits and starts. These changes had little impact on the humans of the day, because the earth's population was then so small, and those few people were more mobile than today's static populations. Global sea levels stabilised about five thousand years ago. As urban civilisations developed in Egypt, Mesopotamia and South Asia the curve of inexorably rising seas flattened out. The planet's population boomed, and by the Industrial Revolution was five times its size two thousand years earlier. And as we crowded shorelines to live, fish and trade, we put ourselves at ever greater risk from the oceans. Changes in sea level are historically cumulative and gradual, but since 1860, the world has warmed significantly and the ocean's climb has accelerated again. From the Great Flood to Hurricane Sandy, The Attacking Ocean explores the changing complexity of the relationship between humans and the sea at their doorsteps, and shows how vulnerable our modern society is.

The re-imagining of the past is entertainingly done, and a great deal of science, especially climate science, is accessibly introduced on the way * A.C. Grayling on CRO-MAGNON *
[A] fascinating account of shifting climatic conditions and their consequences * New York Times on THE GREAT WARMING *

Brian Fagan is emeritus professor of anthropology at the University of California, Santa Barbara. He is the author of Beyond the Blue Horizon, Elixir, the Los Angeles Times bestseller Cro-Magnon, and the New York Times bestseller The Great Warming, and many other books, including Fish on Friday, The Long Summer, and The Little Ice Age. He has decades of experience at sea and is the author of several titles for sailors, including the widely praised Cruising Guide to Central and Southern California.

GOR006279768
The Attacking Ocean: The Past, Present, and Future of Rising Sea Levels by Brian Fagan
Brian Fagan
Used - Very Good
Hardback
Bloomsbury Publishing PLC
2013-06-06
288
1408836033
9781408836033
N/A
Book picture is for illustrative purposes only, actual binding, cover or edition may vary.
This is a used book - there is no escaping the fact it has been read by someone else and it will show signs of wear and previous use. Overall we expect it to be in very good condition, but if you are not entirely satisfied please get in touch with us.