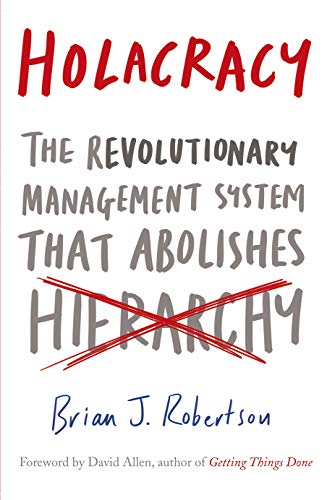 Out of Stock
$17.99
inc. GST
In traditional companies, managers make decisions, and workers execute the plan. But Holacracy is a revolutionary and tried-and-tested new system which turns everyone into a leader. This book explains how to adopt this system across your organisation - and what you can do just within your department - and how to overcome obstacles along the way.
Very Good
Only 0 left

In Holacracy, Brian J Robertson outlines a ground-breaking approach to organisation: no managers, only roles

'Holacracy is the opposite of the cliche way to run a start-up. It creates clarity: who is in charge of what, and who makes each kind of decision' - Evan Williams, cofounder of Blogger, Twitter and Medium

In traditional companies, managers make decisions, and workers execute the plan. But Holacracy is a revolutionary and tried-and-tested new system which turns everyone into a leader. The organisation looks like a nest of circles, not a pyramid -- but it's not anarchy. It's finally clear who should make each decision -- the person on the frontline has that authority -- and the organisation succeeds by adapting swiftly to pursue its purpose.

In Holacracy, pioneer Brian Robertson explains how to adopt this system across your organisation -- and what you can do just within your department or for yourself -- and how to overcome any obstacles along the way.

Holacracy is the opposite of the cliche way to run a startup. People romanticize startup cultures and their lack of structure, but it creates anxiety and inefficiency, whether we have to build consensus around every decision, or deal with land grabs for power. In contrast, Holacracy creates clarity: who is in charge of what, and who makes each kind of decision - and there is a system for changing that, so it's very flexible at the same time -- Evan Williams, co-founder of Twitter and Medium
This book reminds me of a book that I must have read 100 times during my quest to become a better poker player. The first reading will most likely result in a complete paradigm shift, and you'll gain new insight every single time you reread it, especially when interspersed with actual practice playing the game on a regular basis. I highly recommend this book as your 'Holacracy Bible' if you're looking to explore a new way of working -- Tony Hsieh, CEO of Zappos and author of the #1 New York Times bestseller Delivering Happiness
Holacracy is a difficult concept to understand, but its founder Brian Robertson breaks it down simply and thoroughly. Regardless of your conclusion about the system's potential, it is undoubtedly the alternative management approach that will be getting the most attention over the next few years as we see how it affects thousands of employees around the world. -- 20 business books to read this summer * World Economic Forum 'Agenda' *
engagingly straightforward * Bloomberg *

Brian J. Robertson created Holacracy and founded HolacracyOne, the organization that is training people and companies all over the world in this new system. Robertson had previously launched a successful software company, where he first introduced the principles that would become Holacracy, making him not just a management theorist but someone who has successfully implemented a holacracy-powered organization. He lives in Philadelphia.

GOR007735973
Holacracy: The Revolutionary Management System that Abolishes Hierarchy by Brian J. Robertson
Brian J. Robertson
Used - Very Good
Paperback
Penguin Books Ltd
2016-06-02
240
0241205867
9780241205860
N/A
Book picture is for illustrative purposes only, actual binding, cover or edition may vary.
This is a used book - there is no escaping the fact it has been read by someone else and it will show signs of wear and previous use. Overall we expect it to be in very good condition, but if you are not entirely satisfied please get in touch with us.