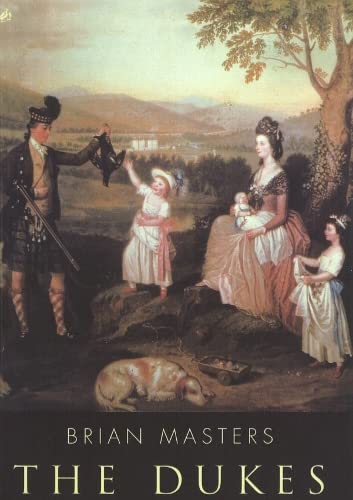 The Dukes
by Brian Masters

The Dukes by Brian Masters

The origins of the non-royal dukes in the British peerage divide nicely into Tudor looters, Royal bastards, opportunist generals, territorial, metropolitan or Scottish magnates. Lloyd George said that a duke, fully equipped, cost more than a dreadnought to maintain and with their palaces, possessions and retinues, they are nearly all splendid. Some of them are, of course, now poor; some of them have great wealth; some of them hit every headline and others are obscure. But within each duchy, Brian Masters tells the story of quaint grandees determined to survive.

The Dukes is an essential guide that provides vital biographical information and explores the history of the dukes in unprecedented depth. This revised edition includes new information which was not available on first publication, and brings up to date the accounts of families whose titles have passed to a subsequent generation in the intervening years.

Excellent mightily researched and readable. Absorbing through so many pages * Scotsman *
Splendidly painstaking and enormously readable -- Arthur Marshall * New Statesman *
With a keen sense of precedence and an admirable grasp of the British peerage system, he darts from duke to duke... racing up and down the genealogies * The Economist *

Brian Masters has written on a wide range of subjects, from dukes to gorillas to murderers. His account of the addictive killer Dennis Nilsen, Killing for Company, won the Gold Dagger Award in 1985, and he followed this with studies of Jeffrey Dahmer and Rosemary West. In between, there were biographies of John Aspinall, Georgina Duchess of Devonshire, Marie Corelli, and E. F. Benson, as well as a book on India and a celebration of Great Hostesses (such as Cunard and Colefax). His book on moral philosophy was entitled The Evil That Men Do. He also published his own memoirs, Getting Personal, in 2002.

GOR001729930
The Dukes by Brian Masters
Brian Masters
Used - Very Good
Paperback
Vintage Publishing
2001-02-01
416
0712667245
9780712667241
N/A
Book picture is for illustrative purposes only, actual binding, cover or edition may vary.
This is a used book - there is no escaping the fact it has been read by someone else and it will show signs of wear and previous use. Overall we expect it to be in very good condition, but if you are not entirely satisfied please get in touch with us.