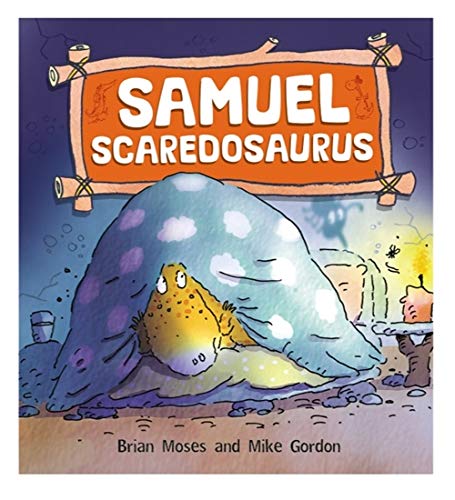 Dinosaurs Have Feelings, Too: Samuel Scaredosaurus
by Brian Moses

In Stock
$15.99
+10% GST
Young children can explore common emotions through these charming stories of dinosaurs, each of whom display feelings such as jealousy, anger and grumpiness.
Very Good
Only 2 left

Dinosaurs Have Feelings, Too: Samuel Scaredosaurus by Brian Moses

Samuel Scaredosaurus was scared of lots of things. He was scared of spiders, strange noises, dark shadows and being left on his own. Would he ever be able to face his fears?

Written by Brian Moses, this humorous picture book explores different things that might scare children, for example shadows and noises in the dark, being lost, bullies, fairground rides, going to school and heights. Different ways of dealing with these fears are then set out showing that there are ways to cope with these, sometimes overwhelming, emotions.

The clever and funny illustrations, by internationally renowned illustrator, Mike Gordon, bring a light-touch to these stories, helping children to learn about their feelings in a fun and light-hearted way.

Excellent notes for parents and teachers at the back of this book show how to approach these issues with children.

He first worked as a teacher but has now been a professional children`s poet since 1988. To date he has over 200 books published including volumes of his own poetry such as Holding the Hands of Angels `Salt` and Behind the Staffroom Door `Macmillan`, anthologies such as The Secret Lives of Teachers and Aliens Stole My Underpants `both Macmillan`, picture books such as Beetle in the Bathroom and Trouble at the Dinosaur Cafe `both Puffin` and non-fiction titles such as Titanic: Lost & Saved `Wayland`. Over 1 million copies of Brian`s poetry books have now been sold by Macmillan and in 2005 he was nominated for both the CLPE Award and the Spoken Word Award.

He has performed his poetry at Borders on Second Avenue, New York and in September 2006 he was invited to Iceland to take part in `Kids in the Marsh` - a festival of children`s poetry and song. At the request of Prince Charles he spoke at the Prince`s Summer School for Teachers in 2007 at Cambridge University. He is one of ten children`s poets invited by then Poet Laureate Andrew Motion to feature on the National Poetry Archive.

Mike Gordon is an ever-popular and award-winning cartoonist. He has produced over 500 cards for Hallmark and over 300 picture books for various publishers. His talent has been rewarded with numerous awards inlcuding Berol cartoonist of the year `1988` and runner up for the Trento Fra realto e Follia `1990`. He was also nominated for the Silver Quill Award `Germany, 1991` and for the Book and Magazine Illustrator of the Year by the National Cartoonists Society `1995`.

GOR009704033
Dinosaurs Have Feelings, Too: Samuel Scaredosaurus by Brian Moses
Brian Moses
Dinosaurs Have Feelings, Too
Used - Very Good
Paperback
Hachette Children's Group
2015-03-10
32
0750280867
9780750280860
N/A
Book picture is for illustrative purposes only, actual binding, cover or edition may vary.
This is a used book - there is no escaping the fact it has been read by someone else and it will show signs of wear and previous use. Overall we expect it to be in very good condition, but if you are not entirely satisfied please get in touch with us.