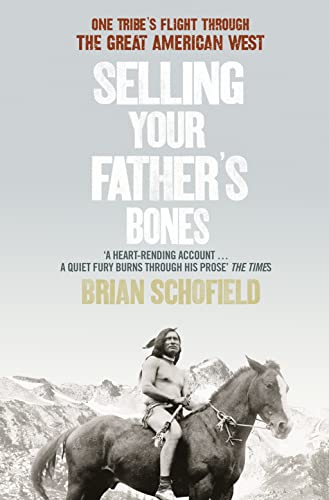 Part historical narrative, part travelogue through the wilds of the West and part environmental polemic, `Selling Your Father's Bones' is a thrilling journey through the history and wilderness of the stunning area of landscape that is Continental USA.

Selling Your Father's Bones: One Tribe's Flight through the Great American West by Brian Schofield

Part historical narrative, part travelogue through the wilds of the West and part environmental polemic, `Selling Your Father's Bones' is a thrilling journey through the history and wilderness of the stunning area of landscape that is Continental USA.

In the summer of 1877, around seven hundred members of the Nez Perce Native American tribe set out on one of the most remarkable journeys in the history of the American West, a 1,700-mile exodus through the mountains, forests, badlands and prairies of modern-day Oregon, Idaho, Wyoming and Montana. They had been forced from their homes by the great wave of settlement that crashed over the West as the American nation was born.

Led by their charismatic chiefs, the Nez Perce used their unerring knowledge of the landscapes they passed through to survive six battles and many more skirmishes with the pursuing United States Army, as they raced, with women, children and village elders in their care, towards the safety of the Canadian border. But all Chief Joseph, the young pastoral leader of the exodus, wanted was to return home - to his beloved Wallowa valley, which his dying father had ordered him never to abandon: 'Never sell the bones of your father and your mother.'

Now, Brian Schofield retraces the steps of that epic exodus, to tell the full dramatic story of the Nez Perce's fight for survival - and to examine the forces that drove them to take flight. The white settlement of the West had been largely motivated by patriotic fervour and religious zeal, a faith that the American continent had been laid out by God to fuel the creation of a mighty empire. But as he travels through the lands that the Nez Perce knew so well, Schofield reveals that the great project of the Western Empire has gone badly awry, as the mythology of the settlers opened the door to ecological vandalism, unthinking corporations and negligent leadership, which have lest scarred landscapes, battered communities and toxic environments.

`Brian Schofield's heart-rending account is interwoven with contemporary scenes from his researches, in a second-hand van, in the hardscrabble ex-lumber towns of 21st-century Idaho. A quiet fury burns through his careful prose, not least in his exquisite footnotes.' The Times

`Schofield's book, which is admirably ambitious in scope, could well turn out to be a classic.' Geographical Magazine

`Schofield...listens respectfully to Native voices and emphasizes their resilience then and now.' TLS

`The notion of homeland is powerfully extended throughout this painstakingly researched book, with it's many possible meanings explored for those who were displaced and those who displaced them.' Claire Coughlan, Sunday Business Post

Brian is only 32 years old and in 2003 he won the best British Travel Writer covering North America.He's spent the last eight years writing for GQ, FHM, Arena and the Sunday Times. He's currently employed as assistant travel editor, culture and news review writer at the Sunday Times. This is his first book.

GOR003110924
Selling Your Father's Bones: One Tribe's Flight through the Great American West by Brian Schofield
Brian Schofield
Used - Very Good
Paperback
HarperCollins Publishers
2009-10-19
384
0007243952
9780007243952
Short-listed for John Llewellyn Rhys Memorial Prize 2008
Book picture is for illustrative purposes only, actual binding, cover or edition may vary.
This is a used book - there is no escaping the fact it has been read by someone else and it will show signs of wear and previous use. Overall we expect it to be in very good condition, but if you are not entirely satisfied please get in touch with us.