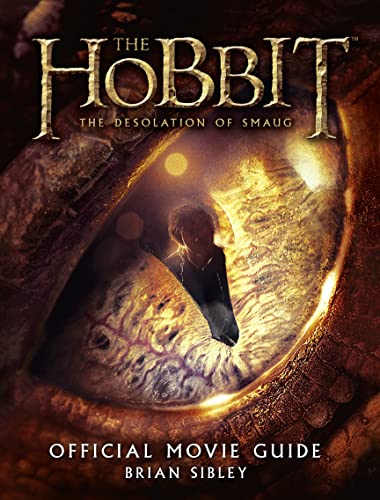 Packed with exclusive behind-the-scenes photographs, this official illustrated guide tells the detailed story of the making of the second film in the award-winning Hobbit trilogy, directed by Peter Jackson.

Official Movie Guide (The Hobbit: The Desolation of Smaug) by Brian Sibley

Packed with exclusive behind-the-scenes photographs, this official illustrated guide tells the detailed story of the making of the second film in the award-winning Hobbit trilogy, directed by Peter Jackson.

Journey deeper into the magical world of the hobbit, Bilbo Baggins, through exclusive interviews with director Peter Jackson, Martin Freeman, Orlando Bloom and principal filmmakers and new cast members, including Stephen Fry as the Master of Lake-town, Evangeline Lilly, who plays Tauriel the Elf, and Benedict Cumberbatch, who reveals film-making secrets about playing the dragon, Smaug.

Richly illustrated with a treasure trove of behind-the-scenes photos of the actors, creatures and costumes, and numerous special effects scenes, this essential guide is an indispensable companion to the second film in the award-winning trilogy.

'In our adaptation of The Hobbit we have done something that Tolkien didn't succeed in doing in print and, hopefully, this will come fresh to people who will have never seen the full story playing out in chronological order.'
PETER JACKSON

Praise for The Hobbit: An Unexpected Journey Official Movie Guide:

'Lavishly illustrated with hundreds of behind-the-scenes photos. Fans of Middle-earth will love it.'
Sunday Mirror

'The book screams "access", and does a great job bringing the filming alive'
SFX

'Packed with exclusive information, this book concentrates on interviews with the cast and crew... ideal for someone interested in moviemaking as much as the story of The Hobbit.'
Hull Daily Mail

BRIAN SIBLEY is a writer and broadcaster with a lifelong interest in fantasy books and cinema. In addition to his award-winning radio adaptations of Tolkien he has collaborated with artist John Howe on J.R.R. Tolkien's The Maps of Middle-earth. Following his bestselling accounts of the making of Peter Jackson's Lord of the Rings trilogy and his official biography, Peter Jackson: A Filmmaker's Journey, Brian returns to chronicle the making of The Hobbit.

GOR005484365
Official Movie Guide (The Hobbit: The Desolation of Smaug) by Brian Sibley
Brian Sibley
The Hobbit: The Desolation of Smaug
Used - Very Good
Paperback
HarperCollins Publishers
2013-11-07
168
0007464479
9780007464470
N/A
Book picture is for illustrative purposes only, actual binding, cover or edition may vary.
This is a used book - there is no escaping the fact it has been read by someone else and it will show signs of wear and previous use. Overall we expect it to be in very good condition, but if you are not entirely satisfied please get in touch with us.
Trustpilot