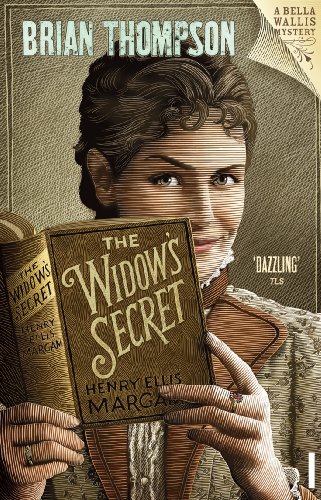 The Widow's Secret
by Brian Thompson

Used Price
$14.49
inc. GST
Free Shipping in Australia
Bella Wallis is a respectable society woman with a secret identity: she writes sensationalist novels exposing the scoundrels that litter high society. So when a crested cigar case is found near the body of a murdered prostitute, Bella and her friends are determined to trace the murderer and write a mystery that will avenge the poor girl's death.
Reviews:
Trustpilot
Very Good

Bella Wallis is a respectable society woman with a secret identity: in an office buried deep within the seedy backstreets of London, she writes sensationalist novels exposing the scoundrels that litter high society under the pen name Henry Ellis Margam.

So when a crested cigar case is found near the body of a murdered prostitute, Bella and her friends are determined to trace the murderer and write a mystery that will avenge the poor girl's untimely death. But the owner of the cigar case is a dangerous - and rich - man who has already destroyed the lives of others who have crossed him. Will Bella see justice done, or will she meet the same fate as so many of her characters...?

The Widow's Secret is the first in the Bella Wallis series of mysteries and takes us from London to Paris, from the highest of society to the lowest of the low. It is an entertaining, effervescent romp and a wonderful introduction to this most charismatic of heroines.

The Widow's Secret drops us headfirst into the realm of 19th-century sensation fiction - the lurid stuff of Wilkie Collins and old-fashioned penny dreadfuls. Although Brian Thompson is best known for his recent memoirs he's equally convincing on murder, mystery and the Victorians. As the curtain-raiser for a new detective series, this novel is a bold beginning. Thompson is clearly having the time of his life here. He revels in the vigilante justice, ribald talk and Dickensian grotesques at his disposal * Sunday Telegraph *
A neo-Victorian yarn that rattles on merrily and rings true. We are told that more instalments of Bella's exploits are on the way. Let them come, say I -- John Sutherland * Financial Times *
Thompson specialises in sharp, elliptical dialogue and brisk little glances into the murk that rises beyond Bella's window -- D. J. Taylor * Guardian *
Brian Thompson writes well and there's a rich vein of humour * Daily Mail *
Entertaining, indeed dazzling. Dickensian in its humour, its vivid evocation of a criminal underworld, and the poverty and filth of the Victorian city * Times Literary Supplement *

Brian Thompson was born in London in 1935 and now lives in Oxford. He has written two award-winning volumes of memoir: Keeping Mum (2006), winner of the Costa Prize for Biography and the PEN/Ackerley Prize, and Clever Girl (2007), longlisted for the Samuel Johnson Prize.

GOR002893404
The Widow's Secret: Bella Wallis Mystery by Brian Thompson
Brian Thompson
Bella Wallis Victorian Mysteries
Used - Very Good
Paperback
Vintage Publishing
2009-06-04
288
0099539489
9780099539483
N/A
Book picture is for illustrative purposes only, actual binding, cover or edition may vary.
This is a used book - there is no escaping the fact it has been read by someone else and it will show signs of wear and previous use. Overall we expect it to be in very good condition, but if you are not entirely satisfied please get in touch with us.