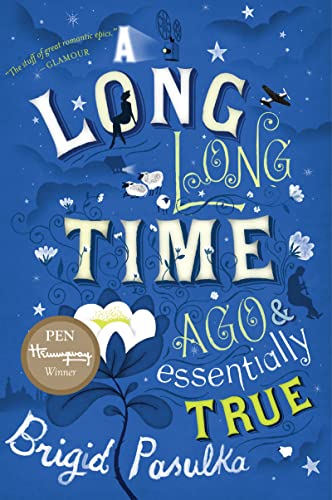 A Long, Long Time Ago and Essentially True
by Brigid Pasulka

In Stock
$56.99
inc. GST
From an original new voice in fiction comes this warm-hearted debut. Pasulka reimagines half a century of Polish history through the legacy of one couple's profound love affair.
Very Good
Only 2 left

A Long, Long Time Ago and Essentially True Summary

A Long, Long Time Ago and Essentially True by Brigid Pasulka

On the eve of World War II, in a place called Half-Village, a young man nicknamed the Pigeon falls in love with a girl fabled for her angelic looks. To court Anielica Hetmanskahe offers up his "golden hands" and transforms her family's modest hut into a beautiful home, thereby building his way into her heart. War arrives to cut short their courtship, delay their marriage, and send the young lovers far from home, to the promise of a new life in Krakow. Nearly fifty years later, their granddaughter, Beata, repeats their postwar journey, seeking a new life in her grandmother's fairy-tale city. But instead of the whispered prosperity of the New Poland, she discovers a Krakow caught between its future and its past. Whimsical, wise, beautiful, magical, and at times heartbreaking, A Long, Long Time Ago and Essentially True weaves together two remarkable stories, reimagining half a century of Polish history through the legacy of one unforgettable love affair.

A Long, Long Time Ago and Essentially True Reviews

Winner of the PEN/Hemingway Prize for Fiction "In this life-affirming novel of past and present, Brigid Pasulka twines the bright colors of fable with the subtler tones of disillusionment, survival, and rebirth--incarnating not only her characters and their lives, but Poland itself. Rarely does a novel succeed so well in evoking place and history, especially with a story as winning as this one. A marvelous debut."
--Nicole Mones, author of The Last Chinese Chef and Lost in Translation

"Two lives, a grandmother's and her granddaughter's, are knit together in a finely wrought tapestry that illuminates an inheritance of a less familiar kind. At once haunting and exquisitely vibrant, Pasulka's original tale is a treasure, transcending history, time, and place." -- Martha McPhee, author of Gorgeous Lies

"Pasulka's delightful debut braids together two tales of old and new Poland. . . . Pasulka creates a world that's magical despite the absence of magical happenings, and where Poland's history is bound up in one family's story." --Publishers Weekly (Starred Review)

"Grand in scope, yet meticulous in detail, Brigid Pasulka's generous and affectionate novel finds universal truths in both its most-dramatic moments and its most-intimate observations. A compassionate, elegant, and moving debut." --Adam Langer, author of Crossing California

"Funny and romantic like all the best true stories." -- Charlotte Mendelson, author of When We Were Bad

BRIGID PASULKA, the descendant of Polish immigrants, first arrived in Krakow in the early nineties, with no contacts, no knowledge of the language, and only a vague idea of Polish culture. She quickly fell in love with the place, learned Polish, and decided to live there for one year. She now teaches English at a Chicago high school.

GOR006361281
A Long, Long Time Ago and Essentially True by Brigid Pasulka
Brigid Pasulka
Used - Very Good
Paperback
Unknown
0
0547336284
9780547336282
N/A
Book picture is for illustrative purposes only, actual binding, cover or edition may vary.
This is a used book - there is no escaping the fact it has been read by someone else and it will show signs of wear and previous use. Overall we expect it to be in very good condition, but if you are not entirely satisfied please get in touch with us.