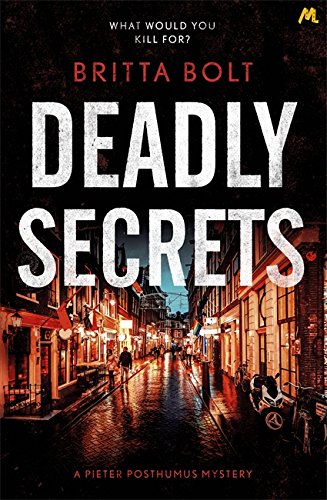 Used Price
$34.99
inc. GST
Free Shipping in Australia
Personal gain or political principle? That's the question Pieter Posthumus must answer in the third of the Amsterdam Lonely Funerals series, when a controversial delegate at an environmental conference is attacked and left for dead...
Reviews:
Trustpilot
Very Good Good Well Read

The third in the atmospheric Amsterdam-set crime series, which combines the city's old-world charm with contemporary issues of corruption, immigration and crime.

Pieter Posthumus wouldn't live anywhere but Amsterdam... though the Earth 2050 conference, with its attendant crowds, has left him feeling somewhat under siege. At least his work at the Lonely Funerals team is quiet.

Then one of the delegates is attacked. Posthumus agrees to look into the case, sparking memories of his own time as a student radical. Amsterdam has always attracted people with fierce views... but is someone willing to kill for their principles? Or was the attack much more personal?

Posthumus must contend with family secrets, political machinations and international conspiracies in a bid to uncover the truth.

Praise for LONELY GRAVES * - *
The main character is a very appealing, convincing and enthralling creation with a truly bizarre occupation...As with Morse, the city where the action takes place becomes one of the main characters...a compelling story that leaves you wanting to hear more about Pieter's work and his life - and how the city copes with its marvellous mix of eccentrics and dangers. * We Love This Book *
One of the best thrillers you will read this season. It is a page-turner full of suspense and surprising twists and turns...Phenomena like home-grown terrorism make this novel just that much more exciting. Once I started reading I could not put it down. -- Ayaan Hirsi Ali
Very engaging...Posthumus holds enormous literary appeal. * Readings Australia *
A delicious writing style makes Lonely Graves an outstanding debut. * Algemeen Dagblad *
No typical thriller...Posthumus is a find! * Vrij Nederland *
An atmospheric and glorious Amsterdam crime story. * JAN *

Britta Bolt was 'born' in January 2010, when former lawyer Britta Boehler, on holiday and reading her favourite crime fiction, felt the urge to turn her past experience into a novel. Rodney Bolt was at home, writing biographies and travel stories, and dreaming of doing the same. Soon afterwards, they had teamed up to write a crime series set in their beloved adopted city Amsterdam.

GOR009257464
Deadly Secrets: The Posthumus Trilogy Book 3 by Britta Bolt
Britta Bolt
Posthumus Mystery
Used - Very Good
Paperback
Hodder & Stoughton General Division
2017-02-23
288
1444787357
9781444787351
N/A
Book picture is for illustrative purposes only, actual binding, cover or edition may vary.
This is a used book - there is no escaping the fact it has been read by someone else and it will show signs of wear and previous use. Overall we expect it to be in very good condition, but if you are not entirely satisfied please get in touch with us.