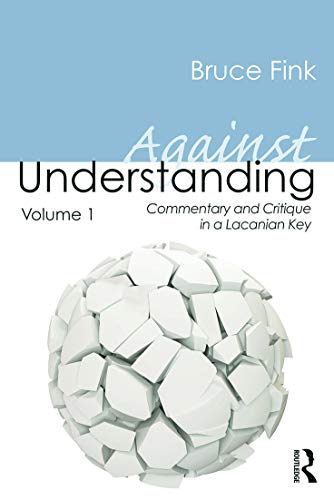 Against Understanding, Volume 1
by Bruce Fink

Against Understanding, Volume 1: Commentary and Critique in a Lacanian Key by Bruce Fink

Against Understanding, Volume 1, explores how the process of understanding (which can be seen to be part and parcel of the Lacanian dimension of the imaginary) reduces the unfamiliar to the familiar, transforms the radically other into the same, and renders practitioners deaf to what is actually being said in the analytic setting. Running counter to the received view in virtually all of contemporary psychotherapy and psychoanalysis, Bruce Fink argues that the current obsession with understanding - on the patient's part as well as on the clinician's - is excessive insofar as the most essential aim of psychoanalytic treatment is change.

Using numerous case studies and clinical vignettes, Fink illustrates that the ability of clinicians to detect the unconscious through slips of the tongue, slurred speech, mixed metaphors, and other instances of "misspeaking" is compromised by an emphasis on understanding the why and wherefore of patients' symptoms and behavior patterns. He shows that the dogged search for conscious knowledge about those symptoms and patterns, by patients and practitioners alike, often thwart rather than foster change, which requires ongoing access to the unconscious and extensive work with it.

In this first part of a two-volume collection of papers, many of which have never before appeared in print, Bruce Fink provides ample evidence of the curative powers of speech that operate without the need for any sort of explicit, articulated knowledge. Against Understanding, Volume 1 brings Lacanian theory alive in a way that is unique, demonstrating the therapeutic force of a technique that relies far more on the virtues of speech in the analytic setting than on a conscious realization about anything whatsoever on patients' parts. This volume will be of interest to psychoanalysts, psychotherapists, psychiatrists, psychologists, social workers, and counselors.

"Bruce Fink's longstanding efforts to translate and explain Lacan to an English-speaking audience in clear, concise, and communicative language culminates in this collection of his recent contributions. He successfully illuminates key Lacanian concepts from a clinical perspective, and provides extensive illustrative overviews of psychoanalytic treatment of severely ill patients.

Several interviews by the author and a final summary of where he places Lacanian psychoanalysis in contrast to Freud's original formulations, on the one hand, and contemporary mainstream ego psychology/object relations theory approaches, on the other, provide a well-defined outline of the essential characteristics of contemporary Lacanian psychoanalysis. Regardless of where they might differ, psychoanalysts and psychodynamic psychotherapists of all contemporary schools will find this a clear and satisfactory introduction to the Lacanian approach." - Otto F. Kernberg, M.D., Professor of Psychiatry, Weill Medical College of Cornell University; Director, Personality Disorders Institute, New York Presbyterian Hospital, Payne Whitney Westchester; Training and Supervising Analyst, Columbia University Center for Psychoanalytic Training and Research

"Over the years, Bruce Fink has established himself as the key figure of Lacanian psychoanalysis in the English-speaking world. With this superb collection of papers and interviews, he once again demonstrates his virtuoso ability to extract the precious juice from Lacan's texts in order to re-process it into a tasty psychoanalytic cocktail that will be greatly appreciated by aficionados and novices alike. And for all his clinical and theoretical brilliance, Fink never takes himself to be the One, but just as one amongst many, so that the reader never feels intellectually inferior and is always allowed to think along with him. As the French would have it: Chapeau!" - Professor Dany Nobus, Chair of Psychology and Psychoanalysis, Pro-Vice-Chancellor, Brunel University London, UK

"Bruce Fink is arguably the foremost commentator and interpreter of Jacques Lacan's work in the United States today, and the publication of a new set of commentaries and case vignettes by him foregrounding the principles of Lacanian practice is thus something of an event for practitioners in the field...Against Understanding provides us with perhaps the best practical sourcebook to Lacanian theory and practice that we currently have. It is often said of the good analyst that he or she knows how to keep the patient talking. The two volumes of Bruce Fink's Against Understanding evince a different skill: they keep the reader reading." - Derek Hook, Psychodynamic Practice

Preface. Acknowledgments. Commentary. On Clinical Practice. Against Understanding: Why Understanding Should Not Be Viewed as an Essential Aim of Psychoanalytic Treatment. Lacanian Clinical Practice: From the Imaginary to the Symbolic. A Lacanian Response to Foucault's Critique of Psychoanalysis.Compulsive Eating and the Death Drive. On Reading Lacan. A Brief Reader's Guide to "Variations on the Standard Treatment".Reading Hamlet with Lacan. On Translation. A Psychoanalytic Ethics of Translation.On Translating Ecrits: A Selection.Cases. Both/And Logic in a Case of Fetishism. Inter(oed)dictions. Sexual Anxieties.Psychoanalytic Approaches to Severe Pathology: A Lacanian Perspective. Marilyn Monroe and Modern-Day Hysteria. Critique. Interview: A Psychoanalyst Has to Speak like an Oracle. Interview: Lacan's Reception in the United States. A Summary Comparison of Psychoanalytic Paradigms.

GOR007169710
Against Understanding, Volume 1: Commentary and Critique in a Lacanian Key by Bruce Fink
Bruce Fink
Used - Very Good
Paperback
Taylor & Francis Ltd
2013-09-23
264
0415635438
9780415635431
N/A
Book picture is for illustrative purposes only, actual binding, cover or edition may vary.
This is a used book - there is no escaping the fact it has been read by someone else and it will show signs of wear and previous use. Overall we expect it to be in very good condition, but if you are not entirely satisfied please get in touch with us.