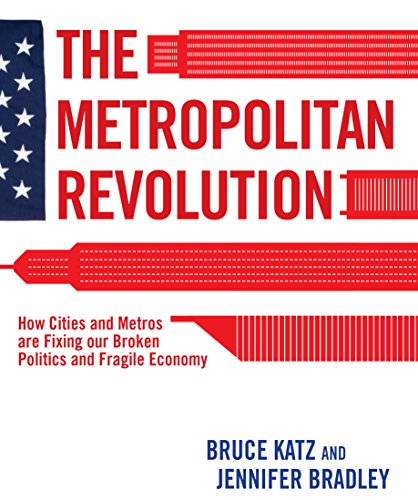 The Metropolitan Revolution
by Bruce Katz

Used Price
$19.49
inc. GST
Free Shipping in Australia
Across the US, cities and metropolitan areas are facing huge economic and competitive challenges that Washington won't, or can't, solve. The good news is that networks of metropolitan leaders are stepping up and powering the nation forward. In The Metropolitan Revolution, Bruce Katz and Jennifer Bradley highlight success stories and the people behind them.
Reviews:
Trustpilot
Good

The Metropolitan Revolution: How Cities and Metros Are Fixing Our Broken Politics and Fragile Economy by Bruce Katz

Across the US, cities and metropolitan areas are facing huge economic and competitive challenges that Washington won't, or can't, solve. The good news is that networks of metropolitan leaders - mayors, business and labor leaders, educators, and philanthropists - are stepping up and powering the nation forward. These state and local leaders are doing the hard work to grow more jobs and make their communities more prosperous, and they're investing in infrastructure, making manufacturing a priority, and equipping workers with the skills they need.

In The Metropolitan Revolution, Bruce Katz and Jennifer Bradley highlight success stories and the people behind them. The lessons in this book can help other cities meet their challenges. Change is happening, and every community in the country can benefit. Change happens where we live, and if leaders won't do it, citizens should demand it.

" The Metropolitan Revolution upends conventional wisdom and makes the case for how our cities and metros are leading American change and progress: they are transforming our national economy, political conversation, and collective destiny from the bottom up like never before. A must-read for anyone working toward a brighter future for our cities and our nation." -Mayor Cory Booker

" The Metropolitan Revolution builds on twenty years of studying metropolitan areas and hundreds of thousands of miles traveling to them around the globe, and the result is an exciting guide to the new world economy - urban, networked, innovative, collaborative, and driven by human potential." -Secretary of Housing and Urban Development Henry G. Cisneros

"Being mayor of Chicago is the best job I've ever had in public life. Katz and Bradley totally get it: the real power to change America lies in our cities and metros." -Mayor Rahm Emanuel

"With paralysis in Washington, public policy solutions will come from successful metropolitan regions, the clinical trials of our future. We are well into this journey, but never has it been explained with such insight and analysis until The Metropolitan Revolution." -Governor Jon Huntsman

"Just when 'by the people, for the people' seems like an anachronism, cities are giving it new meaning, fueled by twenty-first century technology. Every citizen needs to understand the metropolitan revolution. If we change cities, we change the country." -Jennifer Pahlka, Founder and Executive Director, Code for America

"This book captures the energy and excitement bubbling up in cities across America. This is 'do it yourself' urbanism of the highest order, and it is altering our landscape and our country." -Janette Sadik-Khan, Commissioner, New York City Department of Transportation

"Through real-world examples, The Metropolitan Revolution brings to life how America's cities and suburbs drive innovation to solve problems and seize opportunities. This book is a call to action beyond Washington, where metro leaders join together and simply get stuff done." -Mayor Scott Smith

" The Metropolitan Revolution is compelling reading on how our federal system is a powerful advantage in global competitiveness. This book is indispensable for business and elected leaders on realizing the economic potential of metropolitan areas for their citizens and the country." -Treasury Secretary Robert E. Rubin

"Devolving power to cities and metropolitan areas is a development that we rightly ought to celebrate, as Bradley and Katz do." -Ike Brannon, CATO Institute, Regulation

"An American revolution, set against a metropolitan/federal cleavage that is particular to the United States. But it is of interest to readers worldwide because it is being assiduously exported, not least through the expert advice provided to city leaders by the Brookings Institution ... it sits within a burgeoning public and political discourse on cities, from global institutions such as the World Bank and the United Nations to the UK government's promotion of a Northern Powerhouse and `city deals' to devolve centrally held powers." - Julian Dobson, Volume 19 Issue 3 People, Place and Policy

Bruce J. Katz is a vice president at the Brookings Institution and founding director of the Brookings Metropolitan Policy Program.

Jennifer Bradley is a fellow at the Brookings Metropolitan Policy Program. She has written for The New Republic, the Atlantic Monthly, Democracy, and The American Prospect.

GOR008926493
The Metropolitan Revolution: How Cities and Metros Are Fixing Our Broken Politics and Fragile Economy by Bruce Katz
Bruce Katz
Used - Good
Paperback
Brookings Institution
2013-06-11
258
081572151X
9780815721512
Commended for IndieFab awards (Political Science) 2013
Book picture is for illustrative purposes only, actual binding, cover or edition may vary.
The book has been read but remains in clean condition. All pages are intact and the cover is intact. Some minor wear to the spine.