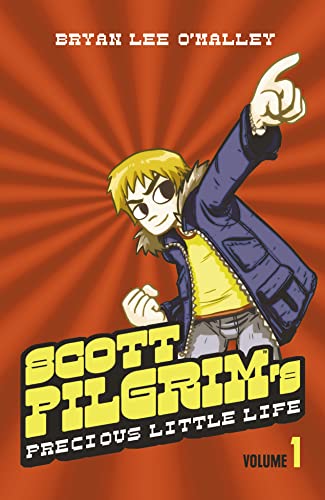 Unless a seriously mind-blowing, dangerously fashionable, rollerblading delivery girl named Ramona Flowers starts cruising through his dreams and sailing by him at parties. Will Scott's awesome life get turned upside-down? Will he have to face Ramona's seven evil ex-boyfriends in battle? The short answer is yes. The long answer is unravelled in `Scott Pilgrim's Precious Little Life', the first instalment of Bryan Lee O'Malley's brilliant `Scott Pilgrim' graphic novel series.

'Earlier this week, an English journalist claimed Jonathan Franzen's soon-to-be published "Freedom" as the novel of the century. A ludicrous accolade, not least because it should more rightly go to Korean-Canadian writer Bryan Lee O'Malley's "Scott Pilgrim" comic-book series.' Telegraph

`"Scott Pilgrim" is the best book ever. It is the chronicle of our time. With Kung Fu, so, yeah: perfect.' Joss Whedon, creator of `Buffy the Vampire Slayer'

`One of the best things to happen to printed comics this millennium.' Ain't It Cool News

`A great oddball tale that captures the energy of a generation.' Publishers Weekly

`An inventive, genre-tweaking tale of young love, platonic bed-sharing and epic battles unlike anything else you will likely pick up. So, go on, pick it up.' E! Online

`Scott Pilgrim is the best 23-year-old ever. Like Proust's Swann, he has a story that takes multiple volumes to unfold, except Pilgrim is even more awesome because he's in a comic book ... the series is wildly enjoyable for its absurdist humor, its indelible characters and its growing, inevitable sense of melancholy as Pilgrim becomes that most terrifying of things: 24 years old.' Glen David Gold, author of `Carter Beats the Devil' and `Sunnyside'

Bryan Lee O'Malley is an award-winning Canadian cartoonist. He has been working on a series of graphic novels called `Scott Pilgrim'. He writes the words and draws the pictures. He occasionally makes music under the name Kupek.

GOR002322497
Scott Pilgrim's Precious Little Life: Volume 1 (Scott Pilgrim) by Bryan Lee O'Malley
Bryan Lee O'Malley
Scott Pilgrim
Used - Very Good
Paperback
HarperCollins Publishers
2010-01-21
168
0007340478
9780007340477
N/A
Book picture is for illustrative purposes only, actual binding, cover or edition may vary.
This is a used book - there is no escaping the fact it has been read by someone else and it will show signs of wear and previous use. Overall we expect it to be in very good condition, but if you are not entirely satisfied please get in touch with us.