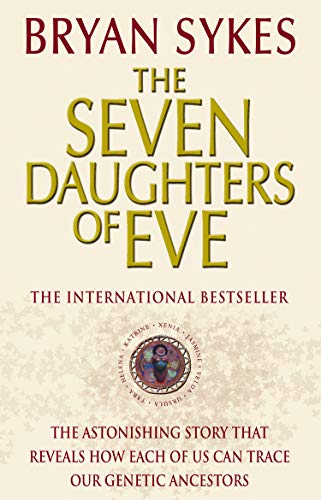 The Seven Daughters Of Eve
by Bryan Sykes

In Stock
$18.49
inc. GST
But what made the story particularly extraordinary was that Professor Sykes was also able to track down a living generic relative of the Ice Man, a woman living in Britain today.
Like New Very Good Good Well Read
Only 1 left

The Seven Daughters Of Eve Summary

The Seven Daughters Of Eve by Bryan Sykes

In 1994 Professor Bryan Sykes, a leading world authority on DNA and human evolution, was called in to examine the frozen remains of a man trapped in glacial ice in northern Italy. News of the discovery of the Ice Man and his age, which was put at over five thousand years old, fascinated the world. But what made the story particularly extraordinary was that Professor Sykes was also able to track down a living generic relative of the Ice Man, a woman living in Britain today. How was he able to locate a living relative of a man who died thousands of years ago? In The Seven Daughters of Eve, Bryan Sykes gives us a first hand account of his research into a remarkable gene which passes undiluted from generation to generation through the maternal line and shows how it is being used to track our genetic ancestors through time and space. After plotting thousands of DNA sequences from all over the world he found that they had clustered around a handful of distinct groups. In Europe there are only seven. The conclusion: almost everyone of native European descent, wherever they live in the world, can trace their ancestry back to one of seven women, the Seven Daughters of Eve. He has named them Ursula, Xenia, Helena, Velda, Tara, Katrine and Jasmine. In this remarkable scientific adventure story we learn exactly how our origins can be traced, how and where our ancient genetic ancestors lived, what their live were like and how we are each living proof of the almost miraculous strength of our DNA which has survived and prospered over so many thousands of years to reach us today. It is a book that not only presents the story of our evolution in a wholly new light, but also strikes right at the heart of ourselves as individuals and of our sense of identity.

The Seven Daughters Of Eve Reviews

"A terrific book, written with humour and humanity" * The Sunday Times *
"An engrossing, bubbly read, a boy's own adventure in scientific story-telling that fairly bounces along... a thumping good read" * Observer *
"Sykes's wonderfully clear book should be compulsory reading for politicians... an eye-opening guide to the new branch of science that is changing the human race's view of itself" * Literary Review *

is Professor of Human Genetics at the University of Oxford, has had a remarkable scientific career in genetics. After undertaking medical research into the causes of inherited bone disease, he set out to discover if DNA, the genetic material, could possibly survive in ancient bones. It did and he was the first to report on the recovery of ancient DNA from archaeological bone in the journal "Nature" in 1989. Since then Professor Sykes has been called in as the leading international authority to examine several high profile cases, such as the Ice Man, Cheddar Man and the many individuals claiming to be surviving members of the Russian Royal Family. Alongside this, he and his research team have over the last ten years compiled by far the most complete DNA family tree of our species yet seen.He has always emphasised the importance of the individual in shaping our genetic world. The website www.oxfordancestors.com offers people the chance to find out for themselves, from a DNA sample, where they fit in. As well as a scientist, Bryan Sykes has been a television news reporter and a parliamentary science adviser. He is the author of The Seven Daughters of Eve and Adam's Curse.

GOR008661292
The Seven Daughters Of Eve by Bryan Sykes
Bryan Sykes
Used - Like New
Paperback
Transworld Publishers Ltd
2004-09-01
368
0552152188
9780552152181
N/A
Book picture is for illustrative purposes only, actual binding, cover or edition may vary.
The book has been read but remains in clean condition. All pages are intact and the cover is intact. Some minor wear to the spine.